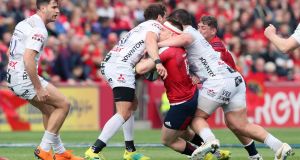 Gloucester’s Danny Cipriani was sent off for this tackle on Munster’s Rory Scannell during the Heineken Champions Cup match at Thomond Park. Photograph: Brian Lawless/PA Wire

Danny Cipriani will face a disciplinary hearing on Wednesday following his sending off in Gloucester’s Heineken Champions Cup defeat against Munster.

The England international outhalf was dismissed for a dangerous tackle on Munster centre Rory Scannell during the first half in Limerick on Saturday.

And tournament organisers European Professional Club Rugby have announced that Cipriani’s hearing will take place before a three-member independent disciplinary committee in Paris.

Cipriani, who was overlooked by England head coach Eddie Jones for next month’s Tests against South Africa, New Zealand, Japan and Australia, faces a potential ban.

A low-end scale entry punishment for his offence is a two-week suspension, rising to six for mid-range and anything between 10 and 52 weeks for top end.

It has been a roller-coaster year for Cipriani. He returned to England’s line-up on their South Africa tour in June, making his first international start for 10 years.

But in August he pleaded guilty to charges of common assault and resisting arrest following a nightclub incident while on a pre-season training trip to Jersey with Gloucester. He was fined by Jersey magistrates and also his club.

He was then charged by the Rugby Football Union with “conduct prejudicial to the interest of the game,” which was upheld following a lengthy hearing in Bristol, but he avoided further sanction.