Conor Murray aiming to return ‘around the end of November’ 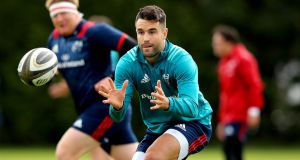 Conor Murray is aiming to return to action by the end of November. Photograph: Ryan Byrne/Inpho

Conor Murray has targeted a return to action for Munster in one of their Guinness Pro 14 games away to Zebre or at home to Edinburgh at the end of November, thereby making himself available for their Heineken Champions Cup back-to-back meetings with Castres in December.

Murray has been sidelined with a neck injury since the start of the season and speaking before confirmation of the Irish squad for the forthcoming, four-match autumn Test series, he admitted: “I’d be surprised if I was named in the squad”.

“I’d be lucky to be named in it because I haven’t played and you need that – especially with the calibre of Argentina and the All Blacks in particular. You’re going to have to be ready.”

Regarding his return to action , he added: “Hopefully in November sometime. We’ve a game in our head, but that could change or be brought forward or it could be pushed out a little bit more. So [it will be] in and around the end of November, or the start of December hopefully.”

“Ideally I’d love to play a game or two, come off the bench and then play Europe and kick-start the season then. I’m not withholding anything, we don’t know. We’ve an idea, but I’ve to pass a couple of strength tests, contact levels and go again.

“It’s not like a hamstring, Grade I, you’ll be back next week or in two weeks.”

In the absence of specific information about his injury, all sorts of rumours have circulated, but in explaining the rationale behind this approach, Murray also confirmed that his neck injury did not require surgery.

“This thing has snowballed big time, because initially, when I was injured at the beginning, we didn’t know when I was going to come back. So I requested that we just say that I am just managing my injury, because we were still trying to figure out how long it would be; whether it would be four weeks, four months, would I have to go under the knife? Thankfully not.

“So that’s why we said it, and I think it was a week later we said that it was my neck injury, but by the time we had said that it has snowballed and people have started rumours.

“Look, I’m training pretty much fully with the squad for the last two-ish weeks, doing controlled contact after training and taking a few bangs that I probably wasn’t expecting in training, which was great, and which I need. I’m getting there. I’m very, very close. Weeks away maybe.

“That’s what every player wants to know, when is he back? Can the physio tell me? But with the type of injury it was with my neck it was literally ‘see how you are Monday, and see what you can do in the gym, see what we can do on the pitch that week, and we will keep on progressing’. Thankfully it’s been pretty smooth, as in I’ve progressed, and progressed, and progressed and there hasn’t been any real hiccups: touch wood. And hopefully in the next few weeks I’ll be able to lace up and get out there.”