Connacht to bring in their heavy hitters for ‘season shaper’ 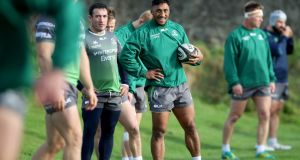 Bundee Aki during training at the Sportsground ahead of Connacht’s clash with Ospreys in the Pro14. Photograph: Bryan Keane/Inpho

Connacht plan on bringing in their heavy hitters for this week’s return to Pro14 action in what is shaping up to be a “season shaper”.

With little between the teams, an away victory to Conference A rivals Ospreys could push Connacht into the top four, and possibly even the top two.

While Glasgow have stretched into a seven-point lead, four teams – Ospreys, Cardiff, Munster and Connacht – are all within three points of each other, and Connacht backs coach Nigel Carolan says team selection will reflect the importance of this fixture.

“They needed a break, and we also needed to build some depth in the squad, and it was with that in mind and this game in mind. It is a very important game in how the season could unfold,” says Carolan.

“[Kieran] Marmion is back, full training after his ankle injury against Ulster, so it’s good to have him back. In fairness to Caolan Blade, he’s been awesome for us – his passing and general leadership has created great competition.”

However, the news is not so good for Craig Ronaldson, who has been ruled out for the season with knee surgery, while youngster Conor McKeon returns to the Sportsground after shoulder surgery in Dublin on Monday. Still ruled out are Matt Healy (foot), Gavin Thornbury (shoulder), Eoin McKeon (shoulder), and Eoghan Masterson (hand).

“We are going with a fresh squad, having rested a lot of guys last week, and during that time we have developed the strength in depth of the squad.

“This particular game against the Ospreys is a season shaper. These games in the Conference are so important from the point of view of winning. When you win you are denying them the access up the ladder as well, and that is why it is really important we go over there fully focused on taking maximum points if we can and deny them as much as possible. All these points count at the end of the season in our Conference.”

Carolan is also hoping the change in venue from Liberty Stadium to Brewery Field Bridgend – as a result of Swansea city hosting Reading – will play into Connacht’s hands, saying, “the fact that it’s in Bridgend takes away the home advantage they would have had in Swansea”.

However Carolan, who was assistant to Allen Clarke in the Ireland U21 set-up for two years, credits the Ospreys’ coach with having “steadied the ship” in Swansea.

“They are playing with a real sense of pride in their region. He [Clarke] has brought in some really positive coaching resources, and they are playing really good rugby, getting the results, and taking some scalps. We have to make sure we are not one of them this week.”