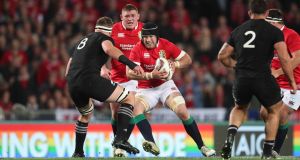 The future of the British & Irish Lions is under threat after they emerged as the biggest losers from the remodelled English domestic season, which confirmed the tourists will have one less week to prepare for the 2021 series against South Africa.

The 2021 tour has been cut to five weeks from six and eight matches from 10 – as agreed in San Francisco in January 2017 – and on Tuesday it was revealed that pleas from the Lions to be given early access to Premiership players have fallen on deaf ears.

The Lions coach, Warren Gatland, and the tour manager, John Spencer, were adamant the tourists needed more time to prepare than they were afforded in New Zealand in 2017 when they arrived a few days before their first tour match, having been unable to leave together until after the Premiership and Pro14 finals. But in line with the new-look English season announced on Tuesday by its key stakeholders, the 2021 Premiership final will take place on June 26th with the Lions set to play their first tour match a week later.

With the tour taking place over five weeks, it means the Lions will have only three weeks together before the first Test. Inevitably, it will also put England players at a disadvantage when it comes to selection with the Pro14 stating last year it was more than willing to move its final forward in Lions years, to the benefit of Ireland, Scotland and Wales players.

Ultimately, the Lions have felt the pinch of the shake-up to the domestic season that has been extended to 10 months, meaning an 11-month season for international players, whose summer tours will now take place in July.

On the face of it, the new season structure, in place from 2019-2022, varies little from the one Premiership Rugby announced 18 months ago, leading senior England players such as Billy Vunipola, Joe Launchbury, Joe Marler and Ben Youngs to voice their concerns and there was talk of going on strike. Then Premiership Rugby said their season would still begin at the start of September and run to the end of June – the start date for the 2020-21 season is September 12th with the final scheduled for June 26th.

However, the Rugby Players’ Association chief executive, Damian Hopley, said industrial action had been averted with a number of enforced breaks and limits of player workload introduced.

They include the maximum game limit of 32 lots of 80 minutes being reduced to 30 – and it will now include Lions tours – while a new measurement of “match involvements” – playing 20 minutes or more – has been introduced with a top limit of 35. Significantly, clubs will now face sanctions for any breaches, having escaped punishment in the past – Mako Vunipola played for Saracens in April when the terms of the existing agreement between the Rugby Football Union and Premiership Rugby stated he should have been rested.

Hopley said: “I had to live through this all 18 months ago when we came to the coalface of it. There was a huge amount of uproar from players who never speak about these things. And one of the key things we have been doing is talking through with players, making sure they are happy with it and we have had a very diligent process around getting out and speaking to players. Still there are questions, but I think – around the principles that we have agreed – there is consensus.”

Lions tours have been pushed to the margins to the extent players will not return home until August, but unlike the 2017-18 season they will not be available to start the following campaign with their clubs. They will face a mandatory 10-week rest period as well as an enforced week off during the 2021 autumn internationals.

England, meanwhile, will send a vastly inexperienced squad to Japan in 2020, without all of their 2019 World Cup squad, except for those who have 20 or fewer “match involvements” next season. If that blueprint becomes permanent it means England will be at full strength for their summer tours once every four years. That is unlikely to be well received by World Rugby, which is attempting to improve the global game by introducing more meaningful Tests as part of a World League.