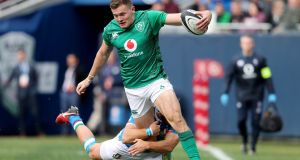 A 100 per cent record in Soldier Field – not bad when it was the world number one team New Zealand and a Six Nations team. There are big winners, Italy are just not one of them.

Digging deeper into the 100 per cent record – and 24 wins from the last 25 meetings against Italy – we gained an immediate insight into where this Irish team have come straight from the kick-off.

Jacob Stockdale has evolved like so many of his teammates – necessity is the mother of all invention. Stockdale has evolved because in a Joe Schmidt world he has no choice. Italian outhalf Carlo Canna’s first kick-off landed in Ireland’s bottom left corner. Stockdale took it and powered out, breaking through three blue jerseys, skimming past another two before a sixth, fullback Luca Sperandio finally pulled him down near the Italian 10 metre line.

Just 1 minute and 42 seconds later Garry Ringrose rolled over the Italian try line for a “try”. It was spilled forward but the variety of choice and execution put the Italians into a tail spin. At the root their problems was Stockdale’s exit; battering the Italian hooker, blindside wing forward and openside wing forward as if they weren’t there.

Larmour got the hat-trick, and deserved the plaudits, but Stockdale’s evolution from the first time I’ve seen him carry out of the Ulster’s 22 from an exit like this has totally changed.

Then he was a big boy, well used to battering schoolboys aside but on that occasion he was stopped and had the ball ripped. In Soldier Field he has become a man, assimilating all of Schmidt’s messages, and Ireland (with other key contributors!) should have scored on 1 minute 42 seconds. Yes to Larmour, but even with no try, yes too to Stockdale.

Interestingly, that very blindside that Stockdale battered, Johan Meyer, was the player to tap tackle Ringrose, preventing that try.

It took Italy exactly one minute to pick themselves up off the deck, reconstitute and crouch, bind and set for the subsequent scrum. A most patient use of the clock that afforded them, and especially their scrumhalf Tito Tebaldi, time to view the entire field before selecting their own clever exit strategy.

Tebaldi slipped down the blindside and hit his fullback Luca Sperandio, who gained a vital exit outside their 22 and by now Italy were up and running. Clever exploitation of Ireland’s back field defence.

Tebaldi continued off the breakdown to his openside Braam Steyn (brushed aside earlier by Stockdale) and Bundee Aki concertinaed in to smash Steyn. All was not lost as Tebaldi went again to his outhalf Canna, who did what a multitude of teams do; find a fatty.

His second row Marco Fuser was on cue, taking it near the gainline but in being hit by Tadhg Beirne he opted for a Beirne-style offload to his hooker Luca Bigi. It wasn’t on, it was spilled and a penalty was conceded. There was some really clever Italian play in that exit passage, but Aki read his defence brilliantly in smashing Steyn and the momentum was gone.

This is a huge challenge for Conor O’Shea. The Italians have clever players but totally lack the athletes and grunt to execute when momentum is swinging away. Later in the game the pendulum had swung out of control, but in those opening moments when Italy were very much asking Ireland questions they hadn’t the temperament to understand the value of managing momentum.

Ireland ignored the obvious three-point penalty to go down the line, and Beirne scored off the subsequent rumble. It made it 7-0, and the clock was still in single figures.

Maybe there’s value in a regular ruck reflection. With an ever-increasing focus on the level of the hit in tackle contact, I’m bemused with the lack of outrage at the ruck. I mentioned on Friday the duration of the washout afforded the team in possession, and feel that this washout will ultimately lead to a serious injury on the jackal as the clear-outs will become impatient and more violent to ensure possession is maintained.

But why did the Italians have to shift their hands? Was it a ruck? At the stage of Owens’ statement both Italians were competing over the ball with Aki, so it had evolved into a ruck, but Giammarioli had arrived first and was entitled to stay. Here is an example of when the jackal should be rewarded; if not he’ll potentially be violently removed as the team in possession are afforded time to keep the ball.

It forced Schmidt et al to get more players in green jerseys, which can be no bad thing. It also gave Joey Carberry another day in the Number 10 jersey.

But perhaps the greatest positive is to the squad left sitting in Ireland as they analysed their direct competition for places, where Larmour, Stockdale, Beirne and many others will ensure competition keeps driving excellence.