Sloppy Leinster earn bonus but not too many more positives 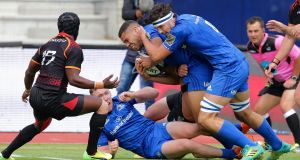 A bonus-point victory will suffice in an overall context but not the performance as Leinster staggered their way to victory in windy Port Elizabeth on Sunday.

The visitors were notably sloppy at times in this Guinness Pro 14 match against a Southern Kings side that struggled with discipline, losing four players to yellow cards. Leinster should have won this match in a canter but instead with the match clock in the red zone at the end of the game, they gave the South Africa franchise a chance to earn an unlikely draw.

The visitors conceded five tries, two were a legacy of interceptions, one came from a slip and 14 points were coughed up when the Kings were a player or players down. Leinster’s carelessness in possession, and at times in decision-making, will make for a painful review. Few will emerge unscathed. Leo Cullen’s side also lost Rory O’Loughlin (knee) and Joe Tomane (hamstring) to injury in the first half.

On the positive side of the ledger, Dan Leavy came through 80 minutes of largely excellent work, while the team amassed six tries. Leinster pulverised the scrum until late on in the match and it was a lucrative avenue for points. The wind played havoc with the lineout throwing, both sides electing for trick plays at the front on several occasions.

When Leinster hung onto possession and went through the phases the scores came pretty easily against a Kings side whose discipline, or lack of it, was singularly responsible in essentially handing the game to Leinster.

The home side got the perfect start when Yaw Penxe profited from a slip by Leinster wing Adam Byrne as he chased back a grubber kick from Martin du Toit. The winger was able to shove the ball over the line with his foot and dot down.

Byrne, who went on to have a fine game in attack, responded with a muscular finish on 15 minutes and Leinster took the lead with a penalty try only to throw away that advantage when Jamison Gibson-Park had a pass intercepted by his opposite number Stefan Ungerer, who raced over unopposed.

Three tries in the last five minutes of the half against a Kings side that were down to 13 players at one point effectively sealed the bonus point and the outcome. Gibson-Park, Leavy and Max Deegan crossed with Noel Reid adding three conversions to leave Leinster 33-12 ahead at half-time.

If Cullen had words at half-time about Leinster’s lack of accuracy they initially had little effect, as Ungerer claimed a second try soon after the re-start following another Leinster move that broke down with the ball going to ground.

Replacement hooker Bryan Byrne crashed over for a try as the game entered the final quarter but Leinster’s profligacy continued to undermine them as they conceded two late tries to replacements Luphumlo Mguca and Dries van Schalkwyk.