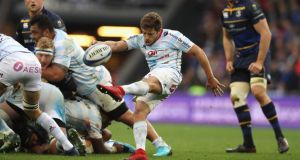 At 6-6 with both teams leaving the pitch for half-time, I felt the margins had swung in Leinster’s favour. They’d weathered the considerable Racing storm in the knowledge that the Parisians’ growing injury list would impact their end game. How Racing needed Dan Carter for that final pass and drop goal. Had he been there, then what?

That it all took to the 78th minute with Isa Nacewa and his “liathróidí cruach” goal-kicking is worthy of deep analysis over coming weeks. Racing were brilliant - or should I say Racing scrumhalf Teddy Iribaren was sensational, not just in the manner in which he kicked but in the manner, with all around him crumbling through injury, he bullied the fixture – often ignoring his third choice outhalf in taking the responsibility himself.

But at 6-6 things were pointing Leinster’s way (in theory). I doff my cap to the the Racing coaches who targeted Leinster successfully in a number of ways. The first was through the lineout. The very first Leinster lineout was called into the middle. This is where Donnacha Ryan was loitering and it seemed a strange initial target. Ryan wasn’t able to get his Munster paws on it, but he was tuned in to Leinster and did enough to disrupt the crisp lineout flow.

Soon after he was able to get his hands on a Leinster lineout – it proved a massive lesson for Leinster and hugely costly for both Ryan and Racing. True to form Leinster soon adjusted aiming the vast majority of lineout ball to the front and James Ryan. It’s not the ideal launch pad, forcing a riskier pass from Luke McGrath, but for two reasons it worked.

Firstly it avoided the former Munster man, but more importantly (and I’m not sure it was the Leinster plan) from that terrible lineout crash Donnacha Ryan’s left shoulder was totally banjaxed. Yes, Leinster laid hands on him, but it was the Racing lifters abandoning him that caused the damage. Either way, my heart crumbled for Ryan and in his final act on the pitch he was unable to hug his fallen team-mates with both arms so badly damaged was his left shoulder.

That he played for 70 minutes or so was simply Herculean; he did more than most to get Racing into this final and his was the most significant injury on the fixture, on Racing, negating his influence around the pitch but especially his ability to lift the player in front at lineout time and spoil Leinster’s platform. All Leinster had to do was target the Racing man in front of Ryan and it was an “easy” target. Leinster knew this and adjusted.

What was  Teddy Thomas thinking in that crucial endgame?

Secondly, Racing targeted Leinster’s Cirque du Soleil precision, especially in midfield. This spoiled first-phase ball and the Racing defence then powered off the line (sometimes a wee bit early). They made some big defensive reads and executions, and the precision that has opened doors for Leinster all season appeared to crumble under the Racing line speed and physicality. This was understandable and once again Leinster had to adjust.

It was in this aspect that Seán O’Brien was sorely missed. What fun he would have had in this corridor, especially as I wondered on Friday how the Leinster backrow would solve Racing problems before they became Johnny Sexton’s? Well, Racing were to pose many that O’Brien could have solved. That he was absent is no reflection of the starting backrow, who were outstanding again, but his physicality would have been useful.

We can’t ignore the principle of fatigue either. Racing had been expected to fade, but you can’t tire the opposition if they are dictating their tactics upon you. For much of the game Racing were able to control the ball through Iribaren managing his fatties and playing a kicking game.

In snatches, Leinster were able to get into their stride and when they did, it didn’t require huge innovation, simply the ability to shift the point of attack and keep the ball away from contact. When this happened, even briefly, Racing began to leak errors.

What was Teddy Thomas thinking in that crucial endgame? Racing had claimed a great turnover at the lineout and the ball arrived to Thomas inside his 22. The wing required rugby intelligence, rugby discipline. What was he thinking? Option a) put two passes on the ball? Option b) kick long? Or option c) abandon all logic, leave your 22 running into heavy traffic and towards the touchline and into touch? Was it Leinster’s game that ultimately fatigued Thomas into such a poor decision?

By the 78th minute Leinster were exhausted too but still thinking. Was this down to fitness, Emmet Farrell’s top class analysis, a team culture or simply the love of being Leinster?

So a word to Leinster – not the team but the province. The wonderful symbiotic nature of Leo Cullen and Stuart Lancaster’s relationship is hugely important, but I noticed Johnny O’Hagan hugging Cullen pitch-side and memories flooded back. Four stars are won because the management set a vision and a culture, but a word for the entire province.

On the flight to Bilbao I overheard two avid Leinster men from Urlingford, Co Kilkenny, discussing the first round of the Munster hurling championship; analysing every step and noting how Tipperary would be so hard to beat. It was fascinating listening to the seamless segue between hurling and rugby.

All around the magnificent San Mamés Stadium the Leinster accents were varied and broad. A word too on all the youths, clubs and schools that feed into the machine – a machine which hasn’t required an oligarch and a monster cheque book to buy success. This is because the coaches, teachers and mentors around the province are building the next generation of dreamers who will soon add to the four.

Stephen Kenny: Ireland reaching the Euros would be ‘extraordinary’ 15:07
Ben Youngs pens a new deal with Leicester 12:05
Solskjær says United’s unbeaten run is ‘nowhere near’ enough 11:53
Eric Dier given four-game ban for confronting fan in the stands 10:59
A glimpse of rugby’s future; assessing Herbert Chapman’s impact on soccer 07:15
Crossword Get access to over 6,000 interactive crosswords