Stuttering Ulster have enough to keep Benetton at bay 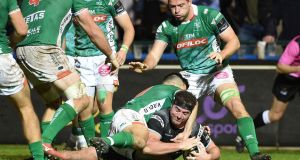 Ulster moved up to second in the Pro14’s Conference B table after another stuttering performance proved to be enough to get past their hosts.

The northern province, who were weakened by international call-ups but had both Stuart McCloskey and Rob Herring back in their ranks after being released by Ireland, came from being 7-0 behind to make it two wins from two as they head into the international break.

It was only Ulster’s second away win of the season though it was anything but convincing, and their lineout issues were horribly exposed again throughout the game. They did just about enough to keep Benetton, who attacked with more purpose than Dan McFarland’s squad, at bay.

“It was really important [that we won],” said McFarland. “Although we put ourselves under the pump in the first half we showed some [fight] every inch mentality.

“We fought hard and to go in at half-time 7-3 down was testament to our defence, and I was pleased with that aspect.

“Coming out we showed much better urgency at the breakdown, and we managed to put some phases together, and it resulted in pressure and tries.”

Second-half tries from Sean Reidy and Herring – Ulster trailed 7-3 at the turnaround – brought the visitors the four points against a Benetton side also heavily diluted by international commitments.

The Italians were totally dominant in the opening 40 minutes, but could only manage a solitary try from hooker Hame Faiva, scored off a lineout maul in the second minute, along with Tommaso Allan’s conversion to show for all their territory and possession.

Tommaso Benvenuti should have scored in the 39th minute, and was over the line only for James Hume to dislodge the ball.

After the restart, an early try from Reidy – Burns who had kicked a first-half penalty missed the conversion – put Ulster in front, and they stayed there until the end.

McCloskey had a 51st minute try ruled out for not grounding the ball after his stretch for the line was looked at by referee Mike Adamson and the TMO but, with flanker Michele Lamaro in the bin for pulling down a subsequent maul, Ulster took immediate advantage, with Herring driving over from close range.

Burns’ conversion put Ulster eight in front, and although the Italians finished strongly – Allen kicking a 62nd minute penalty – their own inaccuracy undid their efforts and the home side had to content themselves with a losing bonus point.

1 Golf clubs waiting to hear if they can stay open under Level 5
2 Johnny Sexton aware of how Ireland can offer fans an escape
3 Extremes of sweet and sour for Solskjaer as Man United show signs of revival
4 Gerry Thornley: After 32 weeks the Six Nations is back up for grabs
5 Arsène Wenger: Arsenal was a matter of life and death to me
Real news has value SUBSCRIBE