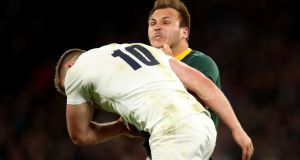 Owen Farrell is free to direct England’s challenge against New Zealand after escaping any disciplinary action for his controversial tackle against South Africa.

World Rugby has confirmed there is no citing arising from the 12-11 victory at Twickenham on Saturday, clearing inside centre Farrell to face the All Blacks next weekend.

Farrell stopped Andre Esterhuizen with a shoulder-led tackle to the chest without wrapping an arm around the Springboks centre, but Australian referee Angus Gardner declined to award a kickable penalty.

It took place in extra-time and had Gardner acted, South Africa would have been given a last-gasp opportunity to win the opening Quilter International.

Citing commissioner Keith Brown had until 24 hours after the final whistle to trigger disciplinary action, but decided the challenge did not meet the required threshold of being a red-card offence.

England will be relieved to have available a player described by Eddie Jones as the team’s “spiritual leader”, but the incident has polarised opinion as the sport continues to tie itself in knots over its crackdown on dangerous tackles.

World Rugby has instructed officials to punish such offences severely in an attempt to reduce the number of head injuries, but a lack of consistency is undermining the process.

South Africa’s management were furious at Gardner’s failure to act, their coach Rassie Erasmus praising the challenge at the post-match press conference in an answer laced with sarcasm.

Former international referee Jonathan Kaplan — a South African — declared Gardner made the wrong decision, adding that Farrell’s “arm wrapping around is an afterthought”.

Farrell himself insisted there was no case to answer, however.

“It went to the touch judge, he said ‘check’ and then it all slows down. Sometimes you can take what you want from it,” Farrell said.

“If you watch that at full speed, he has a big run-up on me and we both bounce off each other and end up on the floor.

“It’s hard to wrap your arms around when you’re both hitting each other at that much force, but I tried to.”

When asked if he had wrapped enough arm around Esterhuizen, Farrell said: “That’s what the referee said and that’s what is most important.”

England wing Chris Ashton felt the decision could have gone either way, Jones had “no idea” if his co-captain would face subsequent disciplinary action while Ben Te’o described the tackle as legitimate.

“It was a legal hit. Sometimes when a big shot is made on the chest, the head whips back,” Te’o said.

“It can look bad in real time, but when you slow it down it’s a chest shot. He had his arm to wrap, so it was a legal hit.

“Owen almost knocked himself out! That’s Owen — he plays with a lot of passion and he really wanted to finish with a win, so it was a big shot.”

Apart from the late drama, Farrell was an inspirational presence who propelled England to victory through force of will as a remarkable defensive performance morphed into series of frantic attacks.

At the heart of the fightback was Saracens’ playmaker, who showed steely resilience to recover from an thunderous earlier tackle by Esterhuizen.

“Owen was intense. He really wanted it so bad. He was banged up and was struggling to get through that, but he soldiered on,” Te’o said.