Riveting final in store as Scarlets too have the size, skill set and smarts to vary their game 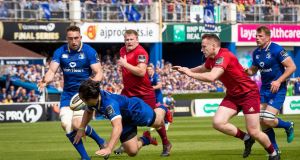 James Lowe’s brilliant offload to Jack Conan set up their crucial try against Munster in the Pro14 semi-final at the RDS. Photograph: Morgan Treacy/Inpho

With this in mind, the fact that Leinster understand the need for brute force and speed and can mix it up at the flick of a switch has got them to where they are this season.

There has been plenty of talk all week about the accuracy and skill levels on display at the RDS, mainly from Leinster, and which in essence separated the sides.

To redress this balance, Munster’s challenge lies not in the professional ranks, nor indeed the academy, but much deeper down in the underage game where skills are not being encouraged uniformly in formative years.

After all, there are more than enough players playing on a weekly basis but they aren’t being exposed consistently enough to the level of skills required. Too often this season international players playing for Munster were unable to execute three v twos. These are skills learned (or ones that should be learned) as a 10-year-old.

The scrum is such a unique part of our game and remains so influential to big -match outcomes. It deserves far more focus than the usual tripe meted out about it slowing the game and disturbing the natural flow for the backs.

The brilliance of Munster’s scrum, a real strength for so long in the RDS, punished Leinster more than any other aspect. How Munster could have done with Stephen Archer on the bench as his team-mate John Ryan began to flag.

Remember, Ryan packed down not against one but two Lions looseheads and that he lasted until the 74th minute was superb. He was up against Cian Healy for 47 minutes and Jack McGrath for nearly half an hour (with Jean Kleyn sinbinned for ten of those, ensuring Munster’s pack were at a numerical disadvantage).

Leinster’s bench made a huge difference but massive credit is due to Ryan and had Archer been there for those closing scrums the outcome could have been oh so different.

Leinster scrumhalf Luke McGrath presented the ball with 30:06 on the clock, with John Ryan taking the hit and Leinster’s Jack McGrath slipping forward onto the deck under dubious binding. But referee Stuart Berry allowed a reset and fresh presentation from Luke McGrath on 30:57 (a wasted minute? Never).

The scrum itself was just inside Munster’s half, 15 metres in from the left touchline leaving a massive right hand openside for Leinster to exploit. As the ball was fed, Ryan went and pivoted McGrath with Rhys Ruddock being sucked in following Ryan.

It might be helpful having Jean Kleyn pushing behind you – in fact, his daft yellow card indiscretion aside, Kleyn had a mighty game. And with Ryan’s loosehead, James Cronin, getting a snap drive on Tadhg Furlong Leinster players stood up under intense Munster pressure, much of it coming from the Munster second row.

So much so that Leinster’s Jack Conan had to detach from his secondrows and move into the channel one slot. This, I fancy, is worthy of another look. For him to transfer from channel two to channel one requires an entire detachment of shoulder and hands. Does that not take him out of the scrum?

Either way, Conan brilliantly scooped the ball left-handed from a scrum that needed to be exited. Quickly. He did brilliantly to get away from Conor Murray and with his scrum wheeling slightly anti-clockwise, he was able to get over the gainline. I don’t know the preordained scrum/backline call but with a glorious open field far enough from the try-line, Leinster’s left wing James Lowe had sneakily slipped across into the openside for an intended play. So a perfect attacking Leinster platform was ruined by the Munster scrum.

But here we get the snapshot into Leinster’s world and their capacity to mix and match. The attacking platform, with a backline loaded to exploit the openside, was immediately abandoned as Conan brilliantly tried to stay alive. Everyone was on the same page as they flicked the switch. The fancy stuff was parked for a moment. Conan slipped outside the Munster backrow and managed to meet JJ Hanrahan head on. Next came a clear out from Lowe.

With the preordained move abandoned, he still knew exactly what was required as Conan was pulled down by CJ Stander and was over his team-mate in less than one second. He came cleanly through the gate and totally neutralised any threat Hanrahan posed over the ball.

One second later McGrath spun the ball out to his attacking line which ultimately found Jordan Larmour who was bundled into touch by Keith Earls. The move may have ended with nothing, but a lesser side would have conceded a scrum penalty, a huge turnover or potentially much, much worse.

To add injury to insult for Munster, Lowe’s clearout was so technically brilliant, with a low shoulder height and immensely powerful, that when he hit the exposed Hanrahan it finished the Munster outhalf’s game as he was forced from the field.

What is Scarlets’ challenge tomorrow? Essentially Leinster’s emotional tank, one that Munster couldn’t quite drain last Saturday, is by now fully topped up again.

I was so excited before their semi-final clash in the Champions Cup, where I predicted that we were in for a cracker and the ball might never have left the pitch so comfortable are both sides are in possession and deep field position. Unfortunately, I was bored as although the Scarlets have the size, skillset and smarts to vary their game they didn’t.

Can they do so tomorrow?