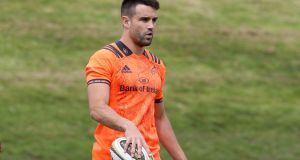 Conor Murray and a kicking game will only provide Munster with so many opportunities. Photograph: Bryan Keane/Inpho

There’s a certain irony in this weekend’s fixtures that only two sides across the Guinness Pro14 won 15 games in the regular season – both Scottish. That Edinburgh found themselves in the play-off with Munster tells us plenty, with the Scottish side third in their conference behind both Leinster and Scarlets, despite winning one more game.

Bonus points can do that to you, but Edinburgh won two more games than Munster. “Them’s the rules” I suppose, but it does tell us a lot about differing styles. The big question tomorrow is what style will Munster employ as they try to put Leinster back in that dark place they found themselves in Bilbao? That’s all Johann van Graan can hope to do. Whether they can close out from there is reliant on many external factors – referee, luck, injuries etc . . .

What can Munster do tomorrow that no one in Europe could, but six other sides managed in the regular Guinness Pro14 season?

To answer this, we ‘obviously’ know how to beat Leinster, or at least push them to the brink. There’s a cause and effect to everything. That the Scarlets couldn’t target the Leinster cause in their European semi-final made Racing’s successful effort fascinating, especially when digging down through the stats.

In the final, Racing had one scrum in the entire match. This is phenomenal testament to the quality of handling from Leinster, especially as Leo Cullen’s side made almost 50 per cent more passes than Racing. Time and again, James Ryan and others received the ball in heavy traffic only to make precious yards when yards were at a premium. Time and again, Johnny Sexton, in trying to open a welded-shut Racing defence, pushed the pass right on the gainline. That Leinster afforded Racing just one scrum (compared to six of their own) was immense. It shows that cheap turnovers were kept to a minimum.

Stylistically, with just 38 per cent of possession against Edinburgh in their Pro14 play-off, Munster managed to outkick Leinster 36 to 27. Leinster had way more possession (over 60 per cent) and chose not to kick, limiting Racing to a much slower start than they enjoyed against Munster. Leinster simply chose to keep the ball in hand whereas Munster chose the aerial route.

That the Leinster front rows had “quiet” games was a nod to the impact Racing made on Leinster’s ball control. Sixty-two per cent in the first half, giving up precious few Racing steals. That is down to many things, but shows the Leinster frontrow dedicated time and technique to guarantee that no man was left isolated. Turnovers did occur, but nowhere near the extent Racing have inflicted on other teams. Players like Tadhg Furlong were able to adapt and transition from his more familiar role around the ball, to a more crucial one helping the ball carrier when isolated on the deck.

Emotional fatigue is now a real danger to Leinster. Munster need to create some emotional doubt. All week Leinster will, I’m sure, be focusing on this issue. How to get themselves back up for the onslaught coming from Munster. The real challenge for Munster is in the knowledge that they don’t have the same armoury as Racing. I noted on Monday the impact of Donnacha Ryan’s shoulder injury had on Racing’s inability to drive their advantage home. For 70 minutes he was unable to lift in the defensive lineouts, but he was also unable to lift in Racing’s lineouts also. In essence, this one injury cost Racing the most. Ironically, Ryan has arguably cost Munster the most. He beat Munster in Paris and the void created by his departure has yet to be filled.

Peter O’Mahony stated this week that “It’s gonna be hard, probably the hardest game we play all year, but it has to be our best performance”. So what qualifies as their best performance? It will require at least parity in the secondrow battle where Jean Kleyn will be pivotal. In the bigger matches he needs more from his secondrow partner, not just in terms of physical impact but creativity, lines of running and so on. A setpiece, can Munster disrupt Leinster ball? We know O’Mahony is world class in this department but can the Munster secondrows also bring something to the party?

The scrum is another area where it looks like tighthead Stephen Archer’s recent surgery will impact Munster’s ability to disrupt. Archer has been consistently starting, with the added might of John Ryan coming off the bench in an extremely strong closing scrum. But with only seven scrums in Bilbao, each precious opportunity to pile on the emotional fatigue on to Leinster will be vital. Any tiny advantage needs to be converted into scores in order to drain Leinster emotionally.

Ultimately Munster will get the ball, so how will they use it? Conor Murray and a kicking game will only provide them with so many opportunities. An obvious alternative is to utilise their back three. But how loose are Munster prepared to become to get Simon Zebo flying?

Finally, a word on Girvan Dempsey. What an opportunity for him and his family heading to the beautiful city of Bath where this is a total win for Todd Blackadder. Getting a backs coach of the calibre of Dempsey is enormous; that he is coming from Leinster is an added bonus not lost, I’d imagine, on the entire English Premiership. When at first you can’t beat them, poach them!