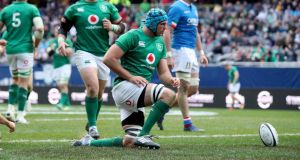 Ireland’s Tadhg Beirne goes over for the third try in their win over Italy at Soldier Field, Chicago. Photo: Dan Sheridan/Inpho

Opposition defending was awful but Larmour numbers tell no lies: 245 metres covered from six clean breaks and 12 defenders beaten, one turnover, three tackles (none missed), twinkle toes has arrived like only one other: this international hat-trick puts genuine pressure on Messrs Kearney, Earls and Stockdale as Joe Schmidt certainly has his number 23 – positional flaws aside – for November and beyond (that means one from Bundee Aki, Garry Ringrose and Robbie Henshaw will not be selected). Rating: 9.

Solid performance on the track and in the air before Luke McGrath’s try while hunting for work on and off the ball keeps him firmly in the Schmidt plans but Larmour majesty leaves a jersey for Argentina and New Zealand dependent upon injury, possibly two. Rating: 7.

Quiet efficiency sparked with two nice breaks, three turnovers and an innate knowledge when to release ball before contact makes him the unrivalled 13 option heading into 2019. That leaves an epic duel between Aki and Henshaw to provide midfield muscle. Rating: 8.

Beat that ferocious work rate, Robbie. Typically combative but caught and stopped before the gainline way more than his 22 carries should have delivered but teammates notice these insane levels of enthusiasm. Hard to drop but a possibility. Rating: 6.

Started like a locomotive, threatening to become one of rugby’s great number 11’s, but the game almost slipped past him until a mini revival before Will Addison’s arrival on 60 minutes. Much more to come. Rating: 6.

The standard is Sexton. Five from five goals but five missed tackles is a blot with the passing outhalf needing to hone that territorial kicking game to be considered a complete international 10. It will happen. Rating: 6.

Bagged one of his trademark Leinster tries when trailing Larmour’s early break with this first start for Ireland providing enough evidence that the 25-year-old is Conor Murray’s undisputed understudy. Now he needs to master the TJ Perenara art of closing games. Rating: 7.

An impressive prop return of 10 carries and 12 tackles (two really important) amongst the falling red woods to reaffirm his value in the Ireland squad as Dave Kilcoyne’s superior carries were punctured by error. Rating: 7.

Another impressive performance from the rising Cork hooker cut short at half-time as the explosiveness of Sean Cronin keeps outsiders scratching their heads about the selection policy in this department. Can Rory Best go where the ageing bodies of John Hayes and Paul O’Connell could not? We shall soon see. Rating: 6.

The progress of this freakish specimen should keep Tadhg Furlong top of the (global) tighthead pile. Someday, maybe not this season, but eventually the 22 year old will apply real pressure on his Wexford pal. Rating: 8.

A shade below beast mode but it’s promised. There is one great debate when the “Ireland Coaching Group” break bread together. Penny for the thoughts of Andy Farrell and Simon Easterby as the reporter’s eye has Beirne the superior forward in two European games – which included Peter O’Mahony and CJ Stander – and now a test match. One from Devin Toner and Iain Henderson must be discarded – nobody is dropping James Ryan – for Argentina and New Zealand unless Beirne provides backrow cover. Ridiculous riches. Rating: 8.

A Schmidt favourite, the South African heavyweight keeps Ultan Dillane out of the reckoning and despite a litany of past injury issues Roux looked precisely what he is; a powerful scrummaging furniture remover. Rating: 7.

Must stay fit. Led by actions and subtle communication but this could be the last we see of the blindside until US Eagles week. The embarrassment of riches left at home informs that O’Mahony, Stander and Sean O’Brien remain the chosen three with Josh van der Flier viciously scrapping with Ruddock for the Argentina bench. Rating: 8.

Robotic but certain type of flanker. Schmidt has backed the red cap machine since 2016 and only for his knee snap last season’s all consuming Dan Leavy displays would not have occurred. Leavy lost time in preseason so, ridiculously, falls to third choice with van der Flier, on this showing, still behind O’Brien. Rating: 7.

Tops the tackle count with 17 and 13 carries is second only to Ruddock’s 18, and while Stander has not looked his superhuman self so far this season the South African Munster man remains the primary number eight. Conan is close but not there yet. Rating: 7.

Brought real energy, Kilcoyne and Cronin as ever, but the true value was acclimatising Will Addison and Ross Byrne for the long road ahead. John Cooney deserves to start against the US. Rating: 7.

Easterby gets the lions share of praise as Schmidt remained in Carton House to work on his new All Black formula. Interestingly, Easterby had full use of his lineout giraffes as Devin Toner and James Ryan also travelled to Chicago. That should pay off this and next week. Rating: 7.

1 Tipping Point: DeChambeau’s transformation raises questions, but who will ask them?
2 John Egan the hero for Sheffield United against Wolves
3 Dara O’Shea moves West Brom closer to a top flight return
4 Different Strokes: Frankie leaves Fleetwood for Hollywood
5 Rory McIlroy: ‘It sort of sucks going off in the middle of the pack on a Sunday’
Real news has value SUBSCRIBE