Joe Schmidt set to name strong squad for mission down under 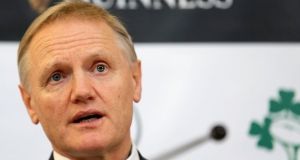 Joe Schmidt will announce his team for the Australia tour today. Photograph: Inpho

Joe Schmidt will announce a squad of about 32 players today for the impending three-Test tour to Australia, and it is a testament to the relatively rude health of the frontline Irish players, the settled nature of the squad and the ambitions for this tour that Ireland will travel fairly locked and loaded.

There are arguments for resting some of last summer’s Lions, as Eddie Jones has done with England, and all the more so 15 months out from the World Cup in Japan. But the Irish player management has largely reduced the post-Lions impact, and none of the soundings from the players themselves, not least Johnny Sexton, suggests any of them are of the remotest mind to have an extended summer’s rest. Collectively too this Irish squad would cherish winning a series down under to augment their unbeaten domestic season.

This is Ireland’s last tour before the World Cup and thus offers a chance to throw down a marker akin to England in 2003, when they backed up a Grand Slam by taking a full-strength squad on a tour of Australasia and beat the All Blacks 15-13 in Wellington and Australia 25-14 in Melbourne. Five months later they won the World Cup.

Furthermore, having missed the expedition to South Africa in 2016, Sexton and Rob Kearney haven’t been on a summer tour with Ireland since 2014, and for many of the new young tyros, this would be a first tour in a Tier 1 country. To put the prize in perspective, allowing for a 2-0 series win against the Pumas in 2014, Ireland haven’t won a series in the southern hemisphere since the Ollie Campbell-inspired 2-0 win of 1979 in Australia.

The notable absentees are Sean O’Brien, Josh van der Flier, Tommy O’Donnell and now Jack O’Donoghue in the backrow, as well as Chris Farrell and Fergus McFadden, so there is a strong hand to pick from.

Schmidt and his fellow coaches met yesterday, with plenty to consider since the Six Nations, and Leinster’s European Champions Cup-winning form should see a few more of their number muscling into the squad.

The main issues would seem to revolve around halfback and whether to include one or two newcomers, such as the Scarlets’s Munster-bound Tadhg Beirne and Sammy Arnold.

World Cup squads are restricted to 31 and so this squad will not number much more than that, and the question is whether they bring a third outhalf, for if anything untoward were to happen to either Sexton or Joey Carbery, an alternative would then be required.

If so, Ian Keatley has been in the squad through last November’s Guinness Series and Six Nations, and thus consistently ahead of Ross Byrne; and that could remain the case.

Alternatively, John Cooney or Rory Scannell could provide cover. As a goal-kicking scrumhalf who can play at “10”, Cooney must be banging on the door given he has made such a success of his switch to Ulster, and his inclusion would also tick a few IRFU boxes given the noise around Ruan Pienaar’s enforced departure and the rumblings around Carbery potentially switching to Ulster or Munster.

Given Luke McGrath missed much of the Six Nations through injury and has since played a host of high-profile European Cup games, including the final, it could be that Kieran Marmion suffers for Connacht’s lack of games in the last four weeks. He mightn’t be alone.

In the absence of Farrell, the uncapped Arnold may travel as one of four centres ahead of Scannell and Rory O’Loughlin given Bundee Aki and Robbie Henshaw can both cover “12”, while the five outside backs virtually pick themselves now.

James Tracy may force his way in ahead of Rob Herring after missing the Six Nations through injury, while Beirne could usurp the Connacht pair of Ultan Dillane and Quinn Roux, despite needing a rest. The Scarlets have been managing his training time and maximising his playing time. Saturday’s Pro14 final will be Beirne’s 30th start of the season, and he has already amassed 2,104 playing minutes. By contrast, although he has also played six times for Ireland this season, James Ryan has started 14 of his 20 games and played 956 minutes.

Yet Beirne, who spent a week in camp during the Six Nations, could be a huge addition to Ireland’s World Cup squad given his versatility, superb abilities over the ball, handling skills and mobility – witness 10 tries this season. Hence, no better time like the present to bring him aboard.

With the backrow proving attritional as ever, the main six still standing look set to travel, unless there is a bolter like Connacht’s Sean O’Brien, highly regarded but short on game time this season due to a shoulder injury, or Ulster’s Nick Timoney.

1 ‘For 25 minutes I ran out of oxygen’: Pepe Reina on his coronavirus battle
2 Sky Sports customers set to save on bills until Premier League returns
3 Gerry Thornley: Changes to tackle laws could transform rugby by time of next World Cup
4 Jack Grealish needs to show that his remorse is real this time
5 ‘This is sick’ - seventh-tier Swedish club cancels friendly after betting mayhem
Real news has value SUBSCRIBE

FAI moves to defer portion of salaries as Fifa ponders cash support 20:30
NFL votes to expand postseason following cancelled annual meeting 20:21
‘For 25 minutes I ran out of oxygen’: Pepe Reina on his coronavirus battle 20:06
World Rugby aiming to outline range of options by end of April 19:03
Impact of Covid-19 fails to derail pragmatic Stenson 18:38
Here is your handy guide to sport on television this week