Warriors will need to take a clinical approach against Scarlets

Defending Pro14 champions won’t be cowed by hostile venue, but Scots could shade this 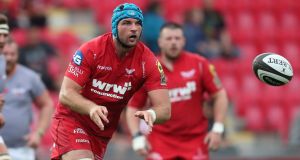 It’s a clash between defending Pro14 champions the Scarlets and their predecessors in that role, Glasgow Warriors, in what promises to be based on their respective playing styles – a dynamic, fast, expansive game, with an emphasis on running rugby. At least that’s the theory.

When these sides met for the only time in the tournament this season in early April, the Welsh side, playing at home, won 26-8, and while that game promised a great deal in the opening quarter with end-to-end rugby, albeit without a single score, it fizzled out a tad thereafter in terms of swash and buckle.

The Scarlets were largely in control that day, leading 19-3 and, despite a try from Glasgow scrumhalf Henry Pyrgos, the home side finished the stronger, embellishing their win when outhalf Rhys Patchell crossed the line for a second time.

Many of the constituents from that match remain, although one notable absentee is Lions and Wales fullback Leigh Halfpenny who damaged his hamstring in the quarter-final win over the Cheetahs. It makes New Zealander Johnny McNicholl’s return timely, from a shoulder injury he sustained at the RDS.

Munster-bound Tadgh Beirne, who should be named in Ireland’s squad for the three Test series in Australia next month, when Joe Schmidt confirms it next week, is named in the secondrow as Aaron Shingler returns to the backrow.

Scarlets coach Wayne Pivac said: “We have a lot of respect for Glasgow, they have a good coaching group, some great players and they’ve got a very strong home record. It makes for a good match-up. Both teams like to play, use the width of the field, and with that type of play it could be a great game.

“Boys enjoy knockout rugby and they enjoy being in these situations. We’re going in there with the mindset that we need to secure a top performance to be able to get on the right side of the ledger.”

Glasgow lost their last two matches in the league format of the competition, to Ulster and then Edinburgh, and haven’t played a match in three weeks, whereas their opponents had the advantage of a quarter-final match against the Cheetahs a fortnight ago.

The Warriors coach Dave Rennie welcomes back some marquee names who missed the Edinburgh game, including Scottish international stalwarts secondrow Jonny Gray and Tommy Seymour as well as Sam Johnson and Pete Horne, the latter included in the replacements. Scotstoun is expected to be a 10,000 sell-out by the time kick-off comes around.

Glasgow are three-point favourites with the bookmakers but, as the Scarlets demonstrated last season when winning the title and beating Leinster at the RDS and Munster at the Aviva stadium, they won’t be cowed by a hostile venue.

The Scottish club’s stronger bench might just hold sway in what should be a cracking encounter. Glasgow will need to be clinical at the breakdown, get quick ball to fullback Stuart Hogg and for the departing Finn Russell to manage the game shrewdly. If it pans out that way, then a final in the Aviva stadium awaits.

1 Ken Early: Handball ‘crisis’ a timely distraction from the grim bigger picture
2 The Offload: Springbok heavyweights heading for Pro14
3 Exeter coach Baxter calls for an end to mass Covid-19 testing in rugby
4 All in the Game: No sympathy from Bruno Fernandes
5 Why did it take the Seahawks years to trust Russell Wilson?
Real news has value SUBSCRIBE

Why did it take the Seahawks years to trust Russell Wilson? 17:33
Serena Williams through after a slow start in Paris 16:57
Exeter coach Baxter calls for an end to mass Covid-19 testing in rugby 16:01
Colin Keane has Shane Foley in his sights as they head for Cork 15:52
Dermot Weld’s Tarnawa won’t be aimed at the Arc 15:47
Here is your handy guide to sport on television this week