Pro14 final: Jack McGrath excited for battle of the ‘unpredictables’ 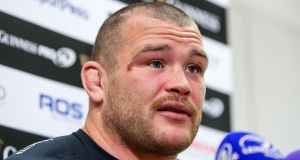 A Leinster team that is predictably unpredictable finds approval with Jack McGrath. The idea comes from the prop with a certain Stuart Lancaster accent on how to make broken play behave like a training ground move.

The art of playing seemingly unstructured rugby with some construction and having a notion of what is going on has taken flight among the ranks.

Lancaster has been name-checked a number of times this season as the coach who has been preaching new testament rugby. Broken play and unplanned moves don’t always have to be fire and brimstone, harum-scarum.

It has also taught Leinster, says the Ireland and Lions prop, to become a more adaptable team. After all, seizing on options is adapting to circumstances better than the opposition can.

That might be invaluable on Saturday for “Scarlets IV The Ultimate Truth In Winner Takes All”.

“Yeah,” says McGrath. “It’s going to be a funny one. I think this is our fourth time preparing for them this season. So we know each other pretty well.

“They forced mistakes and scored some good tries. All their players like to play and it is going to be no different this weekend.”

John Fogarty said, a few days ago, that last week was more difficult to manage as Leinster had to temper their European Cup high for the sake of meeting Munster with a proper, focused game face on.

The mental energy has freely spilled over in the last weeks and players around the RDS are no more immune to running on empty than a Scarlets side now tetchy and hurt from burns, bad grazing and blisters following their Pro14 semi-final win at Glasgow’s 4G pitch last Friday.

There is a ready solution to that: Savlon Cream. Or are we to believe a sneaky Chinese burn could disable the entire Scarlets frontrow?

Distractions can be everywhere. But McGrath has covered similar ground before. While there is a historical significance to winning a Grand Slam, Champions Cup and Pro14 league in the same season, the 28-year-old’s natural disposition appears rooted in restraint. Until the right time.

“For me I’m experienced enough to know when to switch off,” he says. “It’s a very exciting week and you can’t take that away. If you can’t get up for a week like this where you are going for something historic, it is going to be hard to get up for any game of this magnitude.

“The bumps and bruises go out the window when it is finals week and a big game on the line. There is just general excitement.”

McGrath speaks of the 55 players Leo Cullen has used this season, the unsung players of the now damned Scotstoun Stadium in January or slanting rain at Rodney Parade in November. He talks of the long road and modern rugby, where a roster of almost four teams of players are required to become the way Leinster have become.

He says he’s been around long enough to remember when Leinster won a Heineken Cup and then went into a final and were unable to “get over the line”. He extols that sense of wary experience and respects the taste of bitterness that remains in his mouth.

“A lot of great guys have walked through that door at Leinster and not done that,” he says of the growing trophy mountain. “So that is definitely a driving factor.”

It could become a game of who blinks first. Two sumo wrestlers splashing rice at each other before exploding into contact. In that encounter it is a matter of imposition, of Leinster doing better at what they do than Scarlets can do doing what they do.

“We’ve played them three times,” says McGrath. “So we sorta know our blueprint that we’ve done against them in previous games when we’ve won. We obviously didn’t stick to the plan in the times we lost and the times we won we did.

“It’s about getting that blend,” he adds like a talk show host folding egg whites into cream.