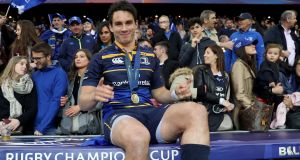 Joey Carbery: Joe Schmidt is keen for him to be a starting outhalf in the Champions Cup next season as the World Cup looms. Photograph: Dan Sheridan/Inpho

Having seemingly rejected a loan move to Ulster, Joey Carbery is now being guided towards a one-season deal with Munster.

Ireland coach Joe Schmidt is keen for Carbery to be a starting outhalf in the Champions Cup next season. The 21-year-old has been the back-up Irish 10 ever since Paddy Jackson was suspended, pending a disciplinary hearing after his rape trial, for which he was found not guilty yet subsequently fired by the IRFU.

However, this season, Carbery has become third choice Leinster outhalf with just one underwhelming start at 10, in the defeat to Treviso last month, and he also started just once for Ireland, against Fiji in November, when forced out of action for two months with a fractured arm.

The IRFU have reportedly blocked Ulster’s well-advanced move to sign Springbok Elton Jantjies which leaves them entering the off-season without a senior outhalf.

Carbery is represented by Esportif’s Ryan Constable, who is also Jackson’s agent, while the same company did the deal for Dan McFarland to become Ulster head coach. However, McFarland is contracted to the Scottish Rugby Union until January so negotiations for a release from his current job as forwards coach under Gregor Townsend, also repped by Esportif, remain unresolved.

So, as it currently stands, Ulster are without an international-calibre outhalf or a date for their new head coach’s arrival. Johnny McPhillips, the English born 21-year-old, is their only recognised 10.

Leinster want Carbery and Ross Byrne to remain on their roster at least until their contracts end in June 2020. A loan deal requires one of them to verbally seek a release from the club, the reason would be to secure game time in a World Cup season.

This is unlikely to happen in the lead up to Saturday’s Pro 14 final at the Aviva stadium.

“My view has always been, and still is, you do what’s right for the player,” said Leinster coach Stuart Lancaster after The Sunday Times revealed that IRFU performance director David Nucifora and Schmidt approached Leinster about releasing Carbery or Byrne.

“You put the player at the centre of the decision, so you don’t do anything other than that. I think Joey has developed brilliantly at Leinster and I think this is where he should stay.”

There is growing evidence that Leinster view Byrne as Johnny Sexton’s eventual successor – having used him at outhalf 26 times this season for 1560 minutes – with Carbery increasingly seen as a fullback.

Interestingly, Schmidt is at the heart of this player movement process but he communicates directly with the player and not the provinces.

The Ireland coach’s overriding ambition is a successful World Cup campaign so he is understandably keen to avoid the very situation that proved so damaging at RWC 2015. When Ian Madigan, who has since left Ireland to join Pat Lam at Bristol via Bordeaux, replaced Sexton at outhalf for the quarter-final against Argentina he had primarily been used at inside centre, fullback or off the bench because former Leinster coach Matt O’Connor preferred New Zealander Jimmy Gopperth.

Madigan is not currently being considered for Ireland selection and along with other exiles, like Donnacha Ryan and Simon Zebo, he will not be named in the squad to tour Australia in June (due to be announced today).

JJ Hanrahan returned from Northampton on a lucrative deal but the Kerry native was unable to remove Keatley from the starting XV until after the Champions Cup semi-final loss to Racing 92. Hanrahan missed a 28th minute penalty, in front of the posts, before limping out of Saturday’s Pro 14 semi-final defeat to Leinster at the RDS (when Byrne played 10 for Leinster with Carbery at 15).

Hanrahan, Keatley and Bleyendaal – who is recovering from his latest neck surgery – all have one season to run on their provincial deals. Johnston, a genuine prospect who showed well for Garryowen and Munster A this season, recently signed a two-year contract.

Johnston was outhalf on the James Ryan-led side that beat New Zealand en route to the 2016 Junior World Cup final.

Should Carbery take the advice of joining Munster to enhance his international prospects, one of the aforementioned outhalves might be redirected from Limerick to Belfast.

All the while Ulster continue to seek permission to sign an established international outhalf to replace Jackson.

Something’s got to give soon.