No Rory Best or Iain Henderson in Ulster team 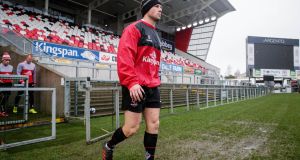 John Cooney has proven his fitness and is in the Ulster XV to face Ospreys on Sunday. Photograph: Inpho

Robbie Diack, Callum Black and Charles Piutau will play their final games in Ulster colours after being named in the starting team for Sunday’s Champions Cup play-off against Ospreys (Kingspan Stadium, 3.05pm).

The coaching team have been boosted by the return of John Cooney and Piutau, the duo missed the trip to Munster earlier this month due to concussion and personal reasons respectively.

However, Rory Best (hamstring), Iain Henderson and Clive Ross (both knee) have been ruled out through injury, so Rob Herring, Kieran Treadwell and Diack come into the side.

That means that there are five personnel changes to the starting XV that drew 24-24 at Thomond Park.

Cooney will start at scrumhalf and he will resume his halfback combination with Johnny McPhillips, who will start for the ninth consecutive game.

Piutau’s inclusion at fullback sees Louis Ludik switch to the right wing berth, with Jacob Stockdale named on the other flank. Stuart McCloskey and Luke Marshall will form a familiar partnership in midfield.

Diack, who is set to earn his 206th Ulster cap on Sunday, will be joined in the back row by Sean Reidy and Nick Timoney.

With Best out injured, Herring comes in to start at hooker and will also take over the captaincy role. Callum Black and Ross Kane will pack down either side of their skipper, while Alan O’Connor and Treadwell are paired in the second row.