Munster, Ulster and Leinster all want Joey Carbery, but Ireland’s need supersedes all 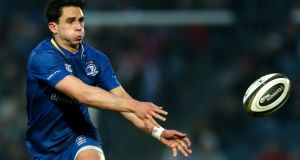 Joey Carbery: It’s likely that Sexton, Carbery and Byrne are the touring outhalves in Australia next month and come the World Cup, but Schmidt needs Carbery to be wearing the 10 jersey in 2018/19. Photograph: James Crombie/Inpho

Some game at the RDS, but Munster will be kicking themselves – or rather, they’ll be wishing they could have kicked themselves into Saturday’s final.

The outhalf conundrum remains the major problem, as it is for Ulster, which contaminates Leinster as the IRFU seek to move Joey Carbery to another province.

Tyler Bleyendaal has had two neck surgeries among other injures. That is serious as Ian Keatley and JJ Hanrahan have not been up to the task of guiding Munster to a European final. Nor, it should be noted, was Bleyendaal against Saracens last season.

Maybe Bill Johnston is the answer. Bleyendaal, if he recovers, can become the 21-year-old’s mentor next season. Conor Murray’s presence could equally work out for Johnston, in the same way Ruan Pienaar helped bring Paddy Jackson to maturity in Ulster.

Whatever about sending Carbery up to Belfast on a 12-month loan – and that’s all this deal appears to be, with a view to helping Ulster recover from losing Jackson and to ready Ireland come the 2019 World Cup – sending him to Munster means one of the four Irish qualified outhalves becomes collateral damage.

Let’s not pretend rugby is not brutal on and off the pitch.

I’m sure both provinces would take Carbery on a year loan with the ulterior motive of keeping him on a more permanent basis.

Worryingly, the decision is put firmly on the player. The IRFU are asking Carbery to switch to Belfast or Limerick, while Leinster are correctly stating they want to keep him. Would you want a player that Graham Henry took one look at and singled out as the future of the club spending time at a rival province, creating even the tiniest chance that he might not return?

Ireland’s need supersedes everything else. That is the paradigm that everyone operates within. Ireland need their outhalves playing regularly over the next 15 months, learning by making mistakes. Johnny Sexton should have a proven understudy if Schmidt is to avoid the curse of 2015 when Ian Madigan had played more minutes at fullback and inside centre when dropped into the 10 jersey to face Argentina in that quarter-final.

Right now, despite the coach’s always meticulous planning, Ireland and Schmidt find themselves in the same position with Carbery.

Madigan is settled at Bristol, with Pat Lam building their return to the Premiership around his right boot and ability to put Charles Piutau into space. So that’s that.

Simon Zebo was the cruellest example. He did not expect to be cut from the Ireland squad last November but this became a valuable negotiating weapon for the IRFU

Jackson, I can only presume, will reappear on an English or French roster at some stage.

The only exception to Ireland selecting home-based players under David Nucifora and Schmidt has been Johnny Sexton. The other potential exception would be Conor Murray if Munster are unable to keep the world’s best scrumhalf after Japan ’19.

This season Nucifora and Schmidt ruthlessly proved they are not for bending: Tadhg Beirne has been one of the best flankers/locks in Europe but all he got was a few hours in Carton House until officially joining Munster. Donnacha Ryan can torture his old team and Leinster all he likes but he lives in Paris now so other secondrow options – Iain Henderson and James Ryan could be unstoppable – are preferred.

Simon Zebo was the cruellest example. Zebo did not expect to be cut from the Ireland squad last November but this became an enormously valuable negotiating weapon for the IRFU: refuse to sign and you lose international honours from the moment you agree terms to leave. It’s like an additional six-month ban.

This worked out for Ireland. Look how Jacob Stockdale and Rob Kearney performed en route to the Grand Slam.

So only one major problem lingers.

Schmidt’s options below Sexton currently appear to be Carbery and Ross Byrne (in that order). Leinster’s inability to facilitate this pecking order has logical reasons: more often than not both players were needed on the field at the same time; Byrne at 10 and Carbery at 15 made the most sense.

Schmidt prefers Carbery, understandably so, as he’s a fantastic rugby talent. It’s likely that Sexton, Carbery and Byrne are the touring outhalves in Australia next month and come the World Cup, but Schmidt needs Carbery to be wearing the 10 jersey in 2018/19.

JJ Hanrahan scuppered his opportunity on Saturday when missing that penalty. He struggled thereafter and could barely move after being driven into the ground by James Lowe.

All this hurts Conor Murray, who cannot influence games consistently because he’s putting out fires all over the place. He’s even the kicker from hand more often, never mind his long-range accuracy off the tee. The best scrumhalf of all time will struggle when his outhalf is not functioning to the necessary standard.

Munster could have caught Leinster at the weekend. Composure proved evasive when momentum shifted behind them. Going to the corner, trailing 13-8 on 69 minutes, was a perfectly legitimate decision by Peter O’Mahony – setting aside the change of plan after the referee had pointed towards the uprights – but Ryan disrupting Gerbrandt Grobler’s clean catch made it the wrong decision. Or it creates a “what if” scenario. It was a tight two-score game. Munster could have made it 13-11 and heaped enormous pressure on Carbery’s 77th-minute penalty (which ended up making it 16-8).

That may not even have come to pass. Munster could have tormented an understandably jaded Leinster team (not that Jack Conan or Scott Fardy looked tired). This was the moment that split the rivalry and summed up Munster’s season.

They will look at this match and wonder where it all went wrong. Maybe start with failing to play semi-final rugby (when the mere hint of points must be seized upon). They got caught trying to play way too much.

This was epitomised by Zebo’s carelessness in attack with forward passes and near-intercepts. It looked like he wanted to make a personal statement, and this seemed to override some of his decisions. Perhaps he wanted to leave his mark on certain people watching in the stand. Sometimes the smartest play is to pass to the player next to you and stay alive.

Munster have suffered year on year since Ronan O’Gara became a coach, with their inability to find a 10 who consistently drives them through the tough, messy games

The Garry Ringrose collision was always going against him. His actions cost Munster dearly. Eddie O’Sullivan made it very clear for me many years ago: if you make 10 brilliant plays along with five poor actions that does not leave you with any credit. Consistency matters.

When, or if, he returns in two years’ time, James Lowe will be Irish-qualified while Jordan Larmour and Stockdale will be in full bloom. Carbery might be a nailed-down place-kicking fullback.

Munster have suffered year on year since Ronan O’Gara became a coach, with their inability to find a 10 who consistently drives them through the tough, messy games. Missing kicks at crucial times will hurt them deep into summer, but it is even more sacrilegious when the opposition need to be squeezed and drained of their energy reserves.

I’m not sure how this problem gets solved without a budget to recruit a world-class play-maker or not being allowed enter the market by the IRFU – you have your four outhalves, lads, sort it out among them. Munster are currently in the Italy and Scotland category. Imagine Conor O’Shea unearths a great Azzurri 10? They could beat anyone. Or look how Gregor Townsend will make real progress if Finn Russell continually improves.

All this highlights the importance of succession planning. Leinster looked at the Mike Ross clock and calculated how much time was needed to bring Tadhg Furlong through. Their plan for tighthead had to be altered by switching Andrew Porter over, and that has proved way more successful, way quicker than anyone imagined. That involved a lot of luck. But you make your own.

I put my hands up on other selection calls by Leinster. The coaches know their players. I was thinking that Munster was one game too many for James Ryan (the full relentless 80 minutes), Furlong (56 sturdy minutes) and Fardy (17 brilliant minutes). How wrong I happily was.

Of course, Ryan is 21. Twenty-two matches since last June is nothing to him. He’s loving every minute of it. Just see how he finished defensively. The overexposure of Maro Itoje in his post-Lions season will not prove Ryan’s fate in his pre-World Cup season. That’s where the Irish system is so valuable. I’d be amazed to see four more 80 minutes against the Scarlets and Test series in Australia. Maybe start his down time after the first test. Give him five weeks’ holidays. Let his body recover, put on a kg or two under Nick Winkelman’s watchful eye, so he becomes even stronger – beginning the slow build towards peaking 16 months from now.

Much like Schmidt is trying to do with his outhalves.