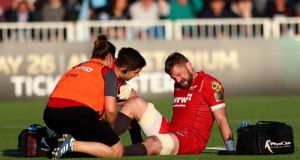 Scarlets have been forced to cancel training ahead of the Guinness Pro14 final with Leinster after their players suffered cuts and burns in the last-four win over Glasgow.

Wayne Pivac’s side reached a second straight final with a 28-13 victory at the home of the Warriors, but the men from Llanelli have seen their preparations for Leinster hit after large numbers of their squad were left struggling following the game with Glasgow.

Scarlets back Johnny McNicholl even claimed Glasgow’s pitch “should be illegal.”

The impact of playing on the artificial surface last Friday forced Pivac to abandon his team’s planned session on Monday and not every player was able to train on Tuesday.

“It was not a nice pitch to play on,” said McNicholl, when asked about the Glasgow surface. “I’ve got a dozen blisters and cuts all over me.

“It has been difficult to sleep with the sheets sticking on me. I remember going down on the ball and I got a massive burn on my backside, a bit like a carpet burn.

“I told the trainer at the time these pitches should be illegal – they are high risk for injury. We haven’t been able to train because of the burns.

“That surface can be good in terms of footwork, but as soon as you hit the deck it can really hurt your joints. I prefer not to play on them.”

Scarlets head coach Pivac added: “We weren’t able to train yesterday (Monday) because of all the blisters and bad burns we picked up in the semi-final in Glasgow.

“We haven’t done any rugby work on the field because of the burns and there will be a lot who won’t train again today (Tuesday).

“I’m not sure how other teams have found that pitch, but we have had a lot of bad burns, grazing, and blisters. We’ve got a very good medical team and I’m sure the boys will heal up for the final, but it is just frustrating we haven’t been able to train in the early part of the week.

“We’ve got to play on these pitches, and you’ve just got to accept it, but I am not a fan of them.”

Scarlets lost Scotland skipper John Barclay with a severed Achilles in the first half against Glasgow. Barclay will miss the tie with Leinster after undergoing surgery and will undergo his recovery in combination with the Scottish Rugby Union and Edinburgh who he will join this summer.

Pivac is hoping that Leigh Halfpenny will come through a fitness test on Thursday to put him in the running for a return against Leinster.

The British & Irish Lions star missed the win over Glasgow and Pivac added: “Leigh has a chance of playing this weekend and he’s done very well with his hamstring injury.

“We will leave the final call until Thursday’s training session.”

Eddie Brennan steps down as Laois hurling manager 13:14
Thomas Galligan and Cavan raring to meet Dublin in Croke Park 12:30
Willie Mullins’ former star mare Laurina is retired 12:35
Sexton and Henshaw to miss Ireland’s clash with Georgia 10:04
Knockout All-Ireland could be the way forward; Gerry Thornley on Ireland’s lineout 07:27
Here is your handy guide to sport on television this week