Bundee Aki to lead the Barbarians against England 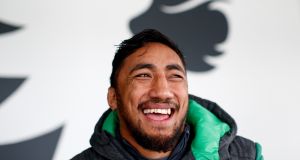 Ireland’s Bundee Aki will lead the Barbarians against England at Twickenham. Head coach Pat Lam has handed the captaincy to the Connacht centre who “epitomises what we need to do” as the invitation side prepare to face Eddie Jones’s team on Sunday, May 27th.

Aki is a Grand Slam winner with Ireland with seven victories from seven starts since making his debut against South Africa last November.

“I’d like to thank Ireland head coach Joe Schmidt for making Bundee Aki available to us as he’ll be a big asset for the Barbarians,” said Lam, who signed Aki for Connacht in 2014.

“The big thing about Bundee is that he’s an unbelievable competitor. A lot of the Pacific Island boys have that X-factor but he loves putting his head in the dark places and thriving in turnover and contact work.

“He’s a huge leader on the field and he has a great understanding and passion for the way I like the team to play. England is a game we’re going to have to work hard in and he epitomises what we need to do. We need the courage to play and move the ball and also to know when we have to tighten things up, and he’ll be at the centre of that.”

The Barbarians have faced England 16 times and are searching for a first win since the 39-29 victory in 2014.