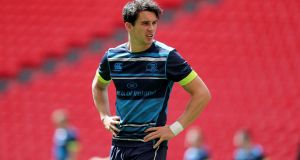 Joey Carbery is set to start at 15 for Lenister against Munster. Photograph: Dan Sheridan/Inpho

Leo Cullen is expected to promote James Lowe and Joey Carbery to the Leinster XV for Saturday’s Pro 14 semi-final against Munster at the RDS.

However, Ross Byrne is set to replace the injured Johnny Sexton(groin) at outhalf while Carbery moves to fullback instead of Rob Kearney, with Scott Fardy also rested after clocking 1,485 minutes over 20 games this season.

Rhys Ruddock shakes off a hamstring problem to start at blindside with Jack Conan moving to number eight, as Dan Leavy makes way. It’s unclear if Leavy is injured or in need of rest with a possible final and three Test series in Australia to follow.

Jack McGrath for Cian Healy is another likely scenario at loosehead prop.

Isa Nacewa has sufficiently recovered from the knock sustained when kicking Leinster to European glory in Bilbao to play inside centre in place of Robbie Henshaw (knee).

Defeat would end Nacewa’s stellar club career after over 180 games for Leinster and almost 750 points.

There are other imminent departures. Jordi Murphy, and possibly Carbery, who clearly needs game time at number 10, is joining Ulster next season.

Both teams will be announced noon Friday.

McIlroy well off pace as Thomas leads low-scoring Zozo 10:24
Seán O’Brien: Anger over my parents’ break-up has never left me 09:30
Touching response to Rashford’s clarion call reveals very best of England 07:00
Michael Walker: Is De Gea an answer again amid the questions at United? 06:00
Greville and Westmeath relishing life in the top tier 06:00
Here is your handy guide to sport on television this week