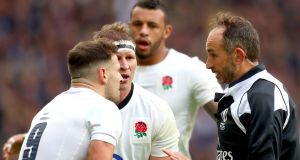 World Rugby has given its backing to the referee Romain Poite after Eddie Jones criticised the Frenchman for his performance during England’s Six Nations victory against Italy on Sunday.

However, while World Rugby has previously announced it is looking into the tackle and ruck laws via its law review process, it is understood no specific changes to the law in question are under way.

Jones was furious at how Italy’s tactic of refusing to ruck affected his side’s 36-15 win at Twickenham, with a number of England players baffled by the innovative strategy. The head coach also took aim at Poite, who was repeatedly asked about Italy’s tactic by England players but could be heard informing Dylan Hartley and James Haskell: “I’m sorry; I’m a referee, not a coach.” Jones said: “The referee got flustered – I have never seen a referee lose his perspective of the game [LIKE THAT].”

World Rugby’s view, however, is that the law was officiated correctly by Poite. The law states that a ruck is formed “when one or more players from each team, who are on their feet, close around the ball on the ground”. If no ruck is formed then there is no offside line.

Jones said after the match that he expects the law to be changed to outlaw the tactic, encouraging the World Rugby chairman, Bill Beaumont, to take action while George Ford warned the strategy could “kill the game”. Italy’s head coach, Conor O’Shea, who revealed he discussed the tactic with Poite at their pre-match meeting, issued a staunch defence of his game-plan but did say: “Will the law change? Of course it will. But we were legal and we played to the law.”

There is a formal World Rugby process via which the Rugby Football Union could seek clarification on the law, which in turn could result in the practice in effect being ended. An RFU spokesman said: “This type of issue is discussed ‘in the round’ with World Rugby, through the normal structures and meetings. World Rugby regularly issue clarifications on various laws so could decide to do this anyway due to the interest generated by yesterday’s match.”

The tactic, dubbed “the fox” by O’Shea, enables defenders to stand in between the attacking scrum-half and his receivers with impunity and has been utilised before by the Chiefs in Super Rugby and by Australia against Ireland in the autumn. Jones, formerly Japan’s head coach, said: “We were going to try it [ONCE]with Japan and we decided no because we thought it was against the spirit of the game.”

England trailed 10-5 at half-time but rallied with five second-half tries – the first of which was scored by Danny Care, who endured a difficult first start for nearly a year at scrum-half. “[IT WAS] a bit of a frustrating game for a No9 but I managed to get a couple of runs out there and a try in the starting shirt,” Care said. “Whatever role I am needed to play against Scotland I will be happy with.”

England host Scotland a week on Saturday knowing victory would equal New Zealand’s record of 18 consecutive wins by a tier-one nation. But Scotland have renewed confidence as they seek a first win at Twickenham since 1983. “They are talking about they are on a roll and when you say you are on a roll you are pretty confident,” Jones said. “I don’t think you’ve ever heard me say we’re on a roll. We’ve won 17 games in a row and we’re not on a roll.”

1 Saudi Arabia-funded takeover of Newcastle United in serious doubt
2 Gerry Thornley: Home and away Six Nations could be its ruination
3 Decision expected next week on staging of College Football game in August
4 Sideline Cut: Vignette shows why Bird is the true shark in The Last Dance
5 Coming fourth in the Olympics didn’t change this fearless quartet, time did
Real news has value SUBSCRIBE