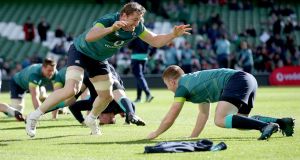 Italy’s ploy of standing off rucks and therefore rendering the offside line obsolete, so allowing their players to come around and flood the channels either side of first Danny Care and then replacement scrum-half Ben Youngs, caused much intrigue and discussion on Sunday.

While carried out repeatedly and catching England off guard, it is hardly innovative. Irish scrum coach Greg Feek recalled how Australia’s David Pocock used the tactic to intercept a Conor Murray pass at the Aviva Stadium last November.

“There are some players who can work it out. Pocock was smart, he read the situation. Whether it was a tactic or not, who knows? Sometimes it can be a one-off or a couple of times it happens in a game. By half-time they [England] had sorted it out. Maybe they were waiting to see ‘ is this a regular occurrence and can we control it?’ Who knows.”

While Eddie Jones complained “it’s not rugby”, Feek and his fellow Irish coaches looked on with respect for Conor O’Shea and his assistants.

“We’re just sitting back watching it and thinking ‘fair play to them’. Unluckily for Italy it worked out in the end [for England]. England were able to get it going, play the game again and restart. They obviously worked on it in the break, came out with a plan. In some ways I can see what Eddie’s saying, because people want to come and watch a game of rugby, watch England do their thing and score tries.

“I just think it’s great for rugby. Whether it’s weather or crowd noise or playing the rules in a different way; it creates a little bit of interest and it’s good for the game.”

Although the scale of Rob Kearney’s groin injury remains unknown, the Irish management are confident that the Irish full-back – who was forced off after 50 minutes of Ireland’s 19-9 win over France last Saturday – will be able to resume training early next week.  “We’ll see how the scan goes, but it’s not too bad,” said Feek.

All 23 of Saturday’s match-day squad, plus the 24th and 25th men, Dan Leavy and Andrew Conway, remained in camp for Monday morning’s open session at the Aviva Stadium, which was attended by an estimated 3,200 fans.

Apart from Kearney, Conor Murray, Cian Healy, Andrew Trimble and Sean O’Brien also remained on the sidelines. In O’Brien’s case he went through a pitchside HIA when taken off on Saturday.

Confirming this, Feek said: “He didn’t train today. A couple of bumps and bruises. It’s just precautionary and Pete was on. So it’s all good from there.”

Asked if O’Brien would be fully fit to train next week, Feek said yes.

Shifting their week forward by one day, the proximity of the Welsh game makes it more problematic to afford some players game time next weekend.

That Ulster and Connacht are at home to Treviso and Zebre on Friday night affords more of an opportunity for the likes of Kieran Marmion, Iain Henderson, Andrew Trimble and Jared Payne. Where Payne is selected to play, centre of full-back, could be interesting too. Although Paddy Jackson has only played 11 minutes of rugby in the last fortnight, the Ulster out-half has played 19 games for province and country this season.

However, that Munster are away to Cardiff on Saturday afternoon makes it trickier to release Niall Scannell and Peter O’Mahony. By comparison, John Ryan has had plenty of game time this season anyway, as has Cian Healy, whose Leinster side host the in-form Scarlets on Saturday night.

Looking ahead to the Welsh game, Feek pinpointed the breakdown as key, adding “we’d like to be a bit tighter with penalties”.

“Accuracy is difficult when you’ve got a ball like a piece of soap. If we can control that better and get a bit of continuity, a bit of go-forward then that helps our game. We need to try and reduce that penalty count a bit more as a focus, there are a few at the scrum that we’d like to get rid of if we can.”

In this Feek shared the frustrations of Jack McGrath and Joe Schmidt over the scrummaging technique of the French and Rabah Slimani in particular.

“We knew coming into it that they’ve had 17 per cent of their scrums played off with the scrums up. We’re sitting around 54 per cent played-off scrum staying up. We were worried with that stat that there was going to be some collapses and instability. There’s not much more we can do; not much more Nigel can do.”

As for the Welsh scrum, Feek said: “They certainly want to play. Every team wants to mess up the other team’s ball which is fine as long as it’s done legally and they can do that quite well. I think we’ll have a look at that and go from there.”