Munster man wants to play for province at weekend, but will abide by Schmidt’s decision 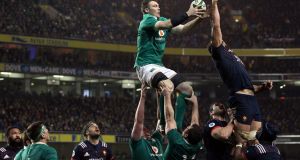 Ireland’s Peter O’Mahony:“We’ve got a big 11 days to get ready for a big international.” Photograph: Brian Lawless/PA Wire

Peter O’Mahony mopped a sweat-stained brow, a product of his labour following an open training session at the Aviva Stadium, in which Joe Schmidt’s Ireland were once again opposed by Nigel Carolan’s Ireland Under-20 team, as they had been recently in Monaghan.

To facilitate the opportunity to give the players a few days off this week before returning to camp in Carton House on Saturday, the workload was condensed into a limb-loosening session and a review of the French game.

O’Mahony will have enjoyed the runaround, having not just been limited to 12-minutes from the bench in the 19-9 win over France, but having not played since Munster’s Champions Cup win over Racing 92 at Thomond Park. He picked up a hamstring niggle that denied him match time until last Saturday.

He’d dearly love to play for Munster in their Guinness Pro12 match against the Cardiff Blues on Saturday but that is when the Ireland squad is due back in camp. Schmidt will adjudicate what’s best for the flanker and O’Mahony will abide by whatever decision is made.

He explained: “There is a lot to be said of going back [to Munster]. I haven’t played a huge amount of rugby in the last month due to my hamstring so you would want to get back.

“But at this time of the year your foremost thinking is doing whatever is best for the squad, so it is whatever Joe [Schmidt] thinks, whatever the lads [coaches] think. If is best for me to go back, I would love to get some game time.”

The backrow is arguably the single most competitive unit within the team in terms of quality and depth, something O’Mahony appreciates. He’s concentrating on training hard, taking the opportunities that are tossed his way, and being supportive in putting the team first, and personal considerations, second.

An example of that quality is CJ Stander, and O’Mahony was asked about his provincial teammate: “CJ has grown [in] every game he has played. He is obviously a fabulous athlete, a physical player and has fitted in well with both Munster and Ireland.

“As you can see he is learning all the time [and] he is pushing everyone on. He is leading the charge at the moment, adapting really well. He is great to be around, great team guy; we are very lucky to have a player of his calibre.

“I suppose I’ve kind of a new challenge. I’ve obviously started a lot of the caps I’ve had for Munster and Ireland and I’m enjoying training, getting back in; it is such a high standard and you are learning all the time.”

The schedule doesn’t get an easier and O’Mahony knows that Ireland face a Wales team determined to avoid a third defeat in four matches, having lost to England at home, and Scotland in Murrayfield. There is no talk about four-try bonus points among the Irish cadre.

“We certainly won’t be talking about bonus points or anything like that; a lot of that is left to the final day to see what way it pans out. If you start getting ahead of yourself you get into trouble and then it’s absolutely no good to you, a losing bonus point.

“As we always have done under Joe [Schmidt], you start and you get a foothold in the game. You build and you might reassess things and you might put some goals together, but until then I don’t think you can against a team of the calibre of Wales.

“It is what makes this tournament special, those wins away from home, because you fight tooth and nail for them and they [offer] a great sense of achievement. There’s a massive amount of work to be done in the next two weeks.”

1 Man United in talks with Dortmund over €100m deal for Sancho
2 Ken Early: Frank Lampard’s problems start at number one
3 The Offload: Schools rugby talk in the Seanad appears tone deaf
4 Rory McIlroy admits missing the crowds as he looks to end Major drought
5 James Ryan set for up to 12 weeks on the sidelines
Real news has value SUBSCRIBE