2017 Six Nations Round Three: The team of the week 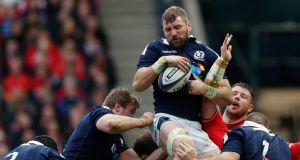 John Barclay stood in as Scotland captain for their win over Wales on Saturday. Photo: Russell Cheyne/Reuters

Scotland were excellent on Saturday and central to that was the performance of Hogg. The fullback was exemplary in all that he did and produced one of the standout moments of the weekend with an inspirational move to set up Tim Visser’s try.

After a poor performance from Jonny May, Nowell came off the bench to replace him in the 55th minute. Surely his performance must have forced his way into the starting lineup for the clash against Scotland in two weeks as he managed to score two tries in his 25 minutes on the pitch.

Given his first start of the Six Nations by Conor O'Shea, the 23-year-old was the standout Italian performer among a team that gave England a real run for their money for much of the 80 minutes. His fine individual try in the 59th minute kept some hopes of an upset alive if only for a few minutes before England moved up a gear.

He took some huge hits from French shoulders when carrying as first receiver off set pieces and opened up a lot of space for Ireland by doing so. With nine tackles also to his name it was another impressive performance from a player with his prime years still ahead of him at just 23.

The Harlequins man was a key cog in Scotland’s win over Wales, both offensively and defensively. He reaped the rewards of Stuart Hogg’s moment of magic to score a try while also setting up Tommy Seymour to go over and foiling Rhys Webb as he broke away to score a certain try.

In the build-up to Saturday’s game there was much talk about Sexton and the inevitable fitness debate. However, the man himself let his boots do the talking at the Aviva with a trademark quality performance. A conversion and two penalties were topped off by a sublime drop goal on 49 minutes to remind everyone of just how important he is.

Quickly becoming the star of the show in a green jersey, Murray did little or nothing wrong on Saturday. He looks to be in the form of his life at the moment and was rewarded with a try. He was also rewarded with a very rare rating of eight in L’Equipe and an ode to his performance which described him as a “Rolls Royce”. High praise indeed.

While there weren’t many outstanding moments in his performance, McGrath put in his usual tough shift for 59 minutes. He made 10 tackles and was key in the winning of the scrum penalty which led to Murray’s try. The battle with Cian Healy for the number one jersey rumbles on.

Perhaps a surprising inclusion, there is one particular Owen stat that stands out. That is that he is yet to have a lineout go against his throw in any of the three matches so far. Not quite as in the spotlight as Rory Best or Dylan Hartley, Owens flies somewhat under the radar.

His immense power was on show once more against France as he laid waste to Yoann Maestri with a wonderful fend and was the key man in Ireland’s impressive pack performance. He beat three defenders and managed two offloads as the pack as a whole won all seven of Ireland’s scrums and 22 lineouts.

The man-of-the-match in an otherwise under par and controversial England performance, he made 60 metres in the attack and seemed quickest to cop on to how to deal with Italy’s no-ruck tactics.

The stand-in captain for the Scots took on his role like a natural leader and didn’t look one bit out of place. He put in a huge 11 carries and 10 tackles and has been getting the credit he rightfully deserves.

His try-saving turnover on Huw Jones was world class and a standout moment but really Tipuric did little wrong the whole game. On what was another disappointing day for Wales he was the standout performer.

He set up Murray’s try and made 15 tackles in another performance that showed off his huge athletic ability. His 100th Test match appearance will come in Cardiff and you can be assured there will be many more to come given his levels of fitness.

Coach of the week: Conor O’Shea

What more can be said? The fact that the Irishman’s tactics have caused such a fuss and managed to confuse and frustrate England for the guts of an hour should be commended. His impassioned defence of Italian rugby last night shows just how determined he is for his side not to be left behind altogether in the Six Nations reckoning.