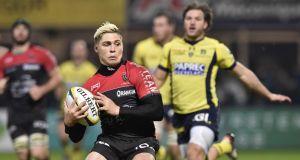 Former Wallaby James O’Connor will be suspended by Toulon and may not have his contract extended following his detention by Paris police for an alleged attempt to buy cocaine, the French club’s president Mourad Boudjellal has said.

The 26-year-old utility back, capped 44 times for Australia, and former All Blacks lock Ali Williams were charged for attempting to buy three vials of cocaine from drug dealers on Saturday, a judicial source told Reuters.

The pair were released on Sunday, with Williams expected to appear in court at a later date and O’Connor to pay a fine for cocaine possession.

“Whatever decision I take, I will take everything into account, and I’ll try not to damage the kid.”

Boudjellal said O’Connor’s brush with the police had “reopened the debate” as to the extension of his contract.

“We’re not at a stage where we would extend it. We’ll try to manage this season. But I do not want to overburden him,” he said.

Williams, a World Cup winner capped 77 times, was suspended by his Paris club Racing Metro over the weekend.

Boudjellal said he felt cocaine use had become common in French rugby.

“It’s my personal feeling, I do not have any evidence but I’m under the impression that it’s invited itself into the rugby milieu because alcohol is not enough anymore,” he said.

“And that’s a bad thing. We had the alcohol step, now it’s a step above because cocaine is festive, it disappears easily.

“It has to stop. So I want to know if it’s an isolated case or if there are other players who like to party.”

Boudjellal’s comments come weeks after the club signed Ben Barba, who was suspended for 12 matches by Australia’s National Rugby League for testing positive for cocaine during celebrations with his championship-winning team Cronulla Sharks last year.

1 FAI council member raises concerns about governance of organisation
2 Gerry Thornley: Stoppage could tip balance in favour of big money teams
3 Increase in membership a plus for adapting golf clubs
4 Royal Portrush: Golf clubs ‘in real distress’ as eyes turn to 2021
5 Colin Kaepernick’s exile is too fresh for NFL to speak out on US protests
Real news has value SUBSCRIBE

Formula One confirms rescheduled European calendar 12:48
Gerry Thornley: Stoppage could tip balance in favour of big money teams 06:30
Increase in membership a plus for adapting golf clubs 06:00
FAI council member raises concerns about governance of organisation 06:00
Fitzgerald says inter-county game should resume before club fare 01:03
Here is your handy guide to sport on television this week