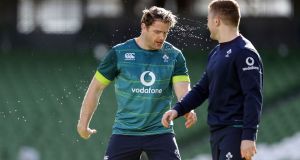 Jamie Heaslip cools off during the Ireland open training session at the Aviva Stadium on Monday. Photograph: Dan Sheridan/Inpho

Although the results of a scan on Rob Kearney’s groin injury remain unknown, the Irish management remain confident that the Irish fullback – who was forced off after 50 minutes of Ireland’s 19-9 win over France last Saturday – will be able to resume training early next week.

Following an open session at the Aviva Stadium, which was attended by an estimated 3,200 fans, the Irish scrum coach Greg Feek said: “There was definitely a tiredness, soreness, the usual stuff, but against the French we’d kind of anticipated that.

“Rob Kearney has a bit of a groin problem so he’s going to get a scan and we’ll see how that goes, but it’s not too bad. So apart from that we actually came through pretty well. I would say the boys will regenerate this week and well deserved too.”

All 23 of Saturday’s match-day squad, plus the 24th and 25th men, Dan Leavy and Andrew Conway, remained in camp for yesterday morning’s open session at the Aviva Stadium, which was attended by an estimated 3,200 fans. Apart from Kearney, Conor Murray, Cian Healy, Andrew Trimble and Sean O’Brien also remained on the sidelines with minor bumps and bruises, albeit in O’Brien’s case he went through a pitchside HIA when taken off on Saturday.

The squad will have the remainder of the week off before a squad of around 35 or 36 players, to be named on Tuesday, will reassemble at their Carton House base on Saturday to begin preparations for their penultimate game away to Wales on Friday week.

Acknowledging that it was an ideal time to have a down week, Feek said: “Physically it’s important but I think that in the back of our minds we’re going to be thinking about Wales as well. They’ll be hurting after the loss at the weekend and we know what’s coming, and our first focus is getting ready for that.

“So I think it’s important that physically we’re there, but also mentally that we don’t switch off too much. They’ll obviously have a break but I think the boys will come in and hopefully fit back into it.”

“If you could talk to the sky and maybe not let it rain before the game, that would help. The ball probably was a bit slippery and you could see at times we were just getting a bit of continuity and then they might flick it out subtly with the hand or might have been a bit slippery so that we couldn’t get it back as quick as we wanted.

“But that’s the beauty of rugby. Every week, even though we’re trying to do the same thing, there’s always something different that comes into play. These things test you and I think going forward, particularly with Wales, the ruck is going to be massively important as it always is. And it puts a bit of a spotlight on sorting that out and then individuals and set-piece, we just always want to be securing our ball and giving quality ball like usual.”

Ireland’s win, coupled with Scotland’s victory over Wales, keeps them alive in a three-way battle for the Six Nations title with unbeaten England.

“I suppose if we had have lost, it would have been really tough this week and moving forward,” said Feek.