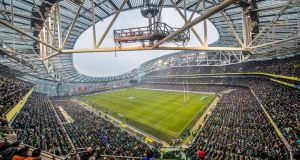 A general view of the Aviva Stadium during Saturday’s Six Nations match between Ireland and France. Photograph: James Crombie/Inpho

IRFU director of communications Stephen McNamara has refuted claims from the French Federation (FFR) that their committee members were in any way snubbed or treated badly last weekend in an off-field tiff which, perhaps not coincidentally, is being played out to the backdrop of the two countries’ rival bids to host the 2023 World Cup.

A report in Monday’s twice weekly rugby newspaper Midi Olimpique claimed that the French Federation committee members were kept apart from their IRFU counterparts at one of the post-match functions at the Aviva Stadium following Saturday’s game.

The FFR secretary general, Christian Dullin, is quoted as saying: “It’s like us hosting other unions at the snack bars under the stands at the Stade de France.”

However, a somewhat bemused McNamara, who said that there had been no complaints from the French over the weekend, maintained that at no point were the respective committee members sent into separate rooms.

“It is actually a really, really big room. So it might have been a case that, with probably 500 people in that room, they didn’t see our guys. But everybody was in the one room.”

Outlining how the French committee members had been hosted at four separate events over the weekend, McNamara added: “On Friday, there would have been a committee dinner, which I think was in Killiney. On the day of the match, there was a pre-match function so everybody had lunch. I think there were about 400 people at that including both committees’ members. Stephen Hilidtch [the IRFU president] stood up and spoke French and welcomed all the committee members and sponsors.

“Everybody went down for the game and came back up afterwards. The lunch room has to be reset for dinner, so that room when you come back up the stairs is closed, and everybody goes into what is in essence a public bar. It’s for premium level, 10-year ticket holders, players’ families and friends, and sponsors. They all go in there and a free bar operates for committee members, and then when dinner starts they’re all invited into the dinner room.”

This was attended by 400 people and included both sets of the respective committee members in full.

“All of our committee guys are in the same room with them the whole time. There is a room just behind the seats that the Irish President, the French Federation president, our [IRFU] president and the junior vice-president go into. It’s a VIP room, so if we have royalty at a game they go in there for a cup of coffee, but everybody else, all of our committee, all of our sponsors go up to that drinks reception room.”

In all of this, McNamara maintained that the IRFU had followed normal procedures. “The same procedure will operate for England. We’re known for our hosting in Ireland and we do it really well, so I can only suggest it’s down to some sort of confusion that [the French thought] there was a separate room that people went into but there’s not. There’s not even a separate room up there that people could go into.”

As for the rival 2023 World Cups, the French team jersey again carried a logo promoting their bid, something the IRFU considered but declined to do.

“We wanted to respect the fact that we started our games away and we were always going to activate things in the stadium, so there was a lot of stuff actually in the stadium. We had the LEDs, we had the flags, it was on the anthem tops, but we actually made a decision not to put it onto the jerseys.

“We’re working with the Six Nations and World Rugby on that, but they [France] put it on [their jerseys] and we’ve no problem with that at all.”

No final round heroics for Rory McIlroy at US PGA 22:18
Ronnie O’Sullivan beats Ding to reach Crucible last eight 21:19
Solskjær praises Martial for building himself into ‘powerhouse’ centre forward 21:14
Tyrone’s McShane ruled out for rest of the season 20:56
Shamrock Rovers battle back at the Brandywell to go six clear 20:42
Crossword Get access to over 6,000 interactive crosswords