Not committing players to rucks requires surprise element to be effective, says Erasmus 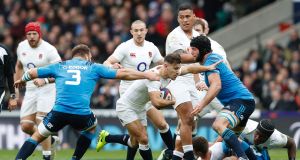 Rassie Erasmus says that most teams in the Pro12 use the tactic employed by Italy at the weekend of not committing players to rucks, but none of them have tried to utilise it throughout a game.

Instead, they opt not to commit players to form a ruck after restarts and on other sporadic occasions during games but the Munster director of rugby says the tactic loses its impact if there is not a surprise element attached.

“Most of the teams do it every now and then. It’s almost like a line-out maul where you don’t engage. They form a cover metre. You can go around and play the guy on the other side. But it’s very seldom that a team does it for the whole game. So you pick out parts where it’s controllable.”

The former Springbok said England got to grips with Conor O’Shea’s ploy after the restart on Sunday.

“England got it right in the second half with pick and go. It will bite you if teams know you are doing it. It needs a surprise element. Lots of teams are currently doing it at certain areas of the game.

“I would definitely be nervous to have it as a strategy for the 80 minutes. Once people know, they will keep the ball in front and will work out counters so it won’t change the game dramatically.

“For me, it is innovative. It’s like some people stand away from a maul and go and defend it another way. It will be interesting to see how if it happens again how teams will counter it.

Meanwhile, Erasmus is hopeful that former Irish international Robin Copeland will be back for this weekend’s trip to Cardiff having been out of action since early January when he suffered a thumb injury.

And former Australian lock Mark Chisholm has returned to full training after being sidelined for almost a year with a concussion issue.

However, Erasmus is sweating on the return to fitness this week of Rory Scannell and Jack O’Donoghue as they bid to bounce back from last weekend’s 30-21 home loss to Scarlets.

On the international scene, Erasmus said he would be surprised if Conor Murray had hopes of becoming Lions captain.

“I don’t know if Conor would like to be the captain. He’s a very down to earth guy and of course the captaincy is a great honour, I haven’t had discussions with him along those lines.

“I’ve only known him for seven months and we have captains in place already. Certainly as a player and with his stature and aura, I’m not sure he would want that,” added Erasmus.