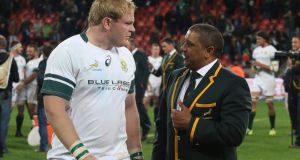 The Springboks suffered a number of unwanted firsts last year, including a home defeat by Ireland and a loss in Italy, as well as an embarrassing 57-15 hammering at the hands of New Zealand in Durban.

“I am glad the review process is done and want to thank the Exco [Executive Committee<DD>)] for reaffirming their support in me as Springbok coach,” Coetzee said in statement from SA Rugby.

“We have no excuses for our poor performances of 2016 even though last year was an extremely challenging season. Our below par performances will never be acceptable and we will have to turn it around.”

Reports in South African media in January linked Munster director of rugby Rassie Erasmus with a possible return to take over the national team but they were subsequently denied through his lawyer.

There are changes to Coetzee’s technical team, with assistant coach Mzwandile Stick dropping out to work with the national under-20 side, and the addition of Cheetahs coach Franco Smith on a permanent basis.

Smith will work with the backs, as he did towards the end of 2016, while Johann van Graan and Matthew Proudfoot have retained their positions among the assistants.

The Boks are also on the hunt for a specialist defence coach and have been in talks with former Bok Brendan Venter, according to widespread media reports, who has a contract with Italy in the same role until 2019.

“Our coaching review was focused on the Springboks and we identified two areas to give Allister Coetzee additional support at the head of our most prized national asset,” SA Rugby president Mark Alexander said.

“Franco Smith will continue the work he began with the backs and attack at the end of last year while we are very excited about the new defensive coach we have identified to address matters raised during the review.

“We expect to be able to confirm that appointment shortly.”

SA Rugby have retained Coetzee despite the side winning only four of their 12 tests in 2016, his first season at the helm of the team.

“We weighed many factors in the review process but we believe that these changes will strengthen the Springbok management hand,” Alexander added.

The Boks are next in action in June when they host France for three Test matches at home.