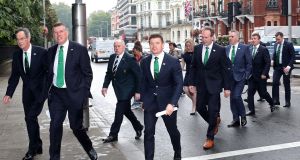 Now to the waiting game. The Irish bidding team for the 2023 Rugby World Cup emerged from Monday’s presentations to the World Rugby Council content that they were true to their promise of unveiling a “world-class bid”, although the scale of the competition from their South African and French rivals also came more closely into view.

In what appears to be the most transparent voting process which a Rugby World Cup bidding war has yet undergone, and certainly by comparison to a FIFA World Cup or an Olympics, the destiny of the 2023 tournament could now well hinge on the findings of the Rugby World Cup’s technical support group.

They have hired outside specialists to assess all three bids before announcing their findings on October 31st, prior to the final decision being taken by the World Rugby Council on November 15th in London.

“It’s going to have a major bearing,” said the IRFU ceo Philip Browne after Monday’s trio of presentations and ensuing press briefings in the Royal Garden Hotel in Kensington.

“And whilst it all boils down to a vote, the voters will have to take cognisance of what the recommendation actually is. So we will all be waiting with bated breath until October 31st.”

In that sense, Browne believes that for all the horse-trading which the three contenders have been undertaking for almost the last year, this will not be decisive.

“I have great faith in rugby that it is not going to fall into that trap. That would be my view. I think rugby is above that, and the majority of the rugby unions in the world are above that.”

Nonetheless, the talking continues. The Irish team have been to every voting nation and association, many times twice over, with the Argentinian board last on their list next weekend.

The Irish canvassing began last November when the team visited the USA and Canadian unions. Their bid has made much of their ability to tap into the Irish diaspora of 70 million, and especially the 40 million of Irish extraction in North America; citing the 62,000 which attended last year’s Ireland-New Zealand game in Chicago.

Browne suggested that the Irish national team could play more tests in other major American cities, and also seek to emulate a World Cup trophy tour, having undertaken the biggest yet for the Women’s World Cup.

The biggest caveat to the Irish bid is that while it met the stated tournament fee of around €135 million, the French (roughly €170 million) and South African (€180 million) have pledged higher tournament fees as well as tournament profits to World Rugby.

However, Browne said the Irish bid had done exactly what World Rugby had asked, and, citing the Irish diaspora and multinationals based in Ireland, vowed their world record financial bid had the certainty of payment by the government, with the hospitality programme underwritten by Sodexo.

“It’s about the quality of the money. And there is no risk attached. This money is bankable. Rugby World Cup know from our bid exactly what they are going to generate. Equally, they have said there should be no risk to Irish rugby or to the host union, because the competition has got so large now there is real potential for a host union to be tipped over if it doesn’t go right. The IRFU and Irish rugby is not exposed in any way financially.”

On his arrival at the Royal Garden Hotel, Taoiseach Leo Varadkar also confirmed that his British counterpart, Theresa May, had written a letter supporting the Irish bid.

“I wouldn’t have missed today for anything,” said Mr Varadkar at the press conference. “It was six years ago when I was minister for sport that the IRFU first came to the government and suggested that we put in a bid for the Rugby World Cup. It’s great to be at this point. I just hope that we get good news in a few weeks’ time.

“This will be without doubt the biggest sporting event that Ireland will ever host if we are successful in winning the tournament. It’s fully backed by government, both in Ireland and in Northern Ireland. We have the infrastructure, the stadiums, the visitor accommodation, key facilities and access.

“The business case adds up for World Rugby, but also for the Irish economy and taxpayer. It is a North-South joint bid, which is really historic.”

Niamh Briggs, captain of the Ireland women’s team, narrated the first video shown to both the assembled media and the World Rugby Council.

“We are drummers, bangers, tin-can rattlers,” she began. “We’re a noisy bunch. The Irish make themselves heard. On the streets, in the corridors of power, on every stage, and in the most unexpected places. We are the people who dared to dream. Our ambition outgrew our geography.”

This was all said to various backdrops, of sun-kissed and green-clad Irish fans, to Barack Obama saying “yes we can” and Liam Gleeson playing Michael Collins.

The video concluded with Bono addressing the crowd at this summer’s Croke Park concert to “demand that the World Cup be played on this hallowed GAA ground in 2023. That will be good. All those in favour?”

The bid’s ambassador, Brian O’Driscoll, also revealed how he addressed the council.

“For those of you who don’t speak Irish, céad míle fáilte is a hundred thousand welcomes. We’re not happy giving you one welcome. We want to give one hundred thousand. So people can expect to be smothered with love.

“This is the biggest tournament that we’re ever likely to host. This is as big as it gets for us. We’re so proud of our country that we will put our best foot forward in every regard. We’re sports lovers. We’re not just rugby lovers. The GAA fans, the football fans, they’ll embrace this and make sure that they’ll adopt second teams in different towns and villages. You just sense that we will do an exceptional job.”