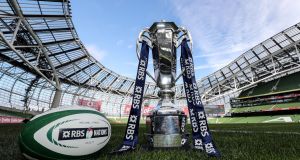 The English Rugby Football Union’s hopes of reducing the Six Nations Championship from seven weeks to six are in effect dead in the water after it emerged the governing body was outvoted five to one at a Six Nations board meeting this week.

Despite widespread opposition from a number of senior England players, the RFU had been pushing for the removal of one of the two rest weeks during the Six Nations from the 2019-20 season onwards but failed to attract any support from the other five unions at the vote.

The RFU has also confirmed that it has loosely discussed the possibility of England and France sitting out the first week of the Six Nations and playing each other on one of the two rest weeks but it is understood that proposal – floated by the clubs – was not discussed at the Six Nations board meeting. It is also understood the plan has not been spoken about with France and the RFU moved to distance itself from the proposal on Wednesday, describing it as part of wider discussions.

That the RFU’s pursuit of a truncated Six Nations has been defeated is not surprising considering that the Welsh and Scottish unions have publicly raised their opposition in the past while the Ireland head coach, Joe Schmidt, has also expressed his concerns over playing five international matches in the space of six weeks. France appeared to be England’s best hope of an ally but they and Italy have joined the other home nations in opposition.

The RFU has ploughed on regardless until now, however, and in March Ian Ritchie, who left his role as RFU chief executive, said: “We believe it is perfectly right to have a six-week competition as opposed to a seven-week one. We think it would improve it. It would narrow the off-periods, help with the broader narrative. We think it is a good route.”

The initial proposal for reducing the Six Nations came about as a result of World Rugby’s restructuring of the global calendar from the 2019-20 season. Soon after the global governing body revealed that the summer Test window would move from June to July, Premiership Rugby announced its intentions to start its season in September and finish at the end of June, thereby creating an 11-month campaign for England internationals.

At the time the England and Harlequins prop Joe Marler was among those players to voice their anger at the proposal.

“If we lost a rest week – I think it’s ridiculous. They can slap me on the wrist for that all they want but it’s such a physical tournament, the game itself is getting more and more physical every week.”

The RFU’s defeat in seeking a shorter Six Nations can be considered a victory for player welfare therefore but recently Marler has been joined by a number of fellow internationals in expressing concerns over a potential 11-month season. Mike Brown lamented the fact that the players were not consulted over the decision while Billy Vunipola joined Marler in suggesting players may strike.

A total of 1.8 million tickets will go on sale in 2018, with full details including prices to be announced in November.

Fans can register their interest on www.rugbyworldcup.com/tickets.

1 Ken Early: Why international football is fading into obscurity
2 Royal Portrush: Golf clubs ‘in real distress’ as eyes turn to 2021
3 Colin Kaepernick’s exile is too fresh for NFL to speak out on US protests
4 Rugby Australia slashes one-third of staff in restructure
5 Louise Galvin’s rugby career on hold for work on the frontline
Real news has value SUBSCRIBE