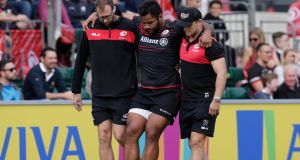 England number eight Billy Vunipola faces a race against time to be fit for the start of the Six Nations after undergoing knee surgery.

Vunipola has been ruled out for 16 weeks with the cartilage damage sustained in Saracens’ 41-13 Aviva Premiership victory over Sale at Allianz Park on Saturday and will miss the autumn series against Argentina, Australia and Samoa.

“For any team to lose a player of the ability of Billy is a blow and he will be missed through the autumn for both Saracens and England,” Saracens director of rugby Mark McCall said.

Vunipola’s absence is a bitter blow to club and country given his appearance against Sale was only the second game of his comeback from the shoulder surgery that forced him to miss the British and Irish Lions tour to New Zealand during the summer.

England’s most destructive player has accumulated serious injuries at an alarming rate over the past 11 months, with the operation to repair his damaged meniscus, which took place on Sunday morning, the third major surgery during that time.

The 24-year-old injured the same knee against Argentina last November, sidelining him for three months.

“It’s desperately disappointing for Billy considering how hard he has worked during the off-season to get back to full fitness,” McCall said.

“Billy is a resilient character and he’ll have a strong support network around him to get him back on the field in the best possible shape.

“What’s now important for Billy is his recovery and we look forward to his return later this season.”

Saracens’ estimated absence of 16 weeks would see Vunipola return in mid-January, leaving him with only two matches to prove his fitness before England open their Six Nations title defence against Italy in Rome on February 4th.

This latest setback has come less than a fortnight after Vunipola urged rugby’s powerbrokers to shorten the season after declaring his body “could not handle” the demands of the modern game, adding that players may be forced to go on strike.

“It’s about the toil we’re put through. Something is going to give. Something might happen where we follow the NFL or NBA, where they had a lock-out,” he said.

“It comes down to how much we play. My body could not handle it. I might think I’m strong and tough, but I’m not. I just got worn down.”

Vunipola’s place in the 33-man squad assembling for a three-day training camp in Oxford on Sunday night has been filled by Jack Clifford.

Clifford had fallen out of favour with England having won all 10 of his caps under Eddie Jones, but his all-action display in Harlequins’ 31-28 defeat by Leicester on Saturday will have impressed the Australian, who was watching from the stands.

A trio of Quins players will arrive in Oxford nursing injuries after Chris Robshaw, Mike Brown and Marcus Smith were hurt at Twickenham Stoop.

Robshaw must observe return to play protocols after being knocked out and Brown has an ankle problem that saw him limp through the final minutes due to Harlequins having used all their replacements.

Quins’ 18-year-old outhalf prospect Smith is less of a worry, however.

“Chris Robshaw was an immediate removal from the pitch. He’s fine and was up and about in the changing room, so there are no issues are there,” director of rugby John Kingston.

“Marcus was precautionary because he was tight around the calf area and the last thing I wanted was for him to carry on and pull a muscle when we have enough players unavailable.

“Mike Brown’s ankle is sore, that actually happened last week. He scrubbed up to play and he took another knock on it – he was in quite a lot of misery.”

Already in the treatment room heading into this weekend were captain Dylan Hartley, Joe Marler and Anthony Watson.

Hartley is missing a second successive match because of a hand problem, Watson is sidelined by a knee injury and Marler is being treated for a rib ailment.

1 Connell losing touch with club championship is real tragedy of Normal People
2 Some Premier League clubs set to face three matches in seven days
3 Increase in membership a plus for adapting golf clubs
4 Colin Kaepernick’s exile is too fresh for NFL to speak out on US protests
5 Coming fourth in the Olympics didn’t change this fearless quartet, time did
Real news has value SUBSCRIBE