Munster brought down to earth by Glasgow at Scotstoun 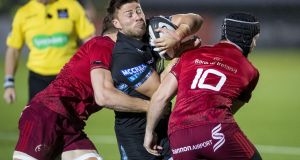 High-flying Munster were brought down to earth by a Glasgow side that outclassed them with a display of attacking rugby to which the Irish province had little answer.

Glasgow were rewarded after four minutes of play by a try from replacement wing Leonardo Sarto.

Finn Russell added the conversion points and then increased his tally with a 40-metre penalty goal to put Warriors into double figures.

Munster drove a penalty-created line-out but were held up on the line, but the attack was moved to the right with a long pass that found try scorer Rory Scannell, the centre just managing to stretch out and dot the ball down one-handed.

The Glasgow forwards pounded the visitor’s line and Munster’s defence held firm, but when Russell rifled a penalty kick up the touch line Glasgow were able run the ball at Munster once more. A penalty provided relief for Munster, who then showed their attacking flair.

The pressure on Munster continued and when the visitors were caught offside Russell duly dished out the punishment.

From the restart Callum Gibbins escaped up the right touchline before handing on to wing Lee Jones who ran in Warriors’ second try, converted by Russell for a 20-5 half time lead.

Munster’s woes continued at the start of the second half when secondrow Billy Holland was sent to the bin for a maul offence. Glasgow quickly made their extra man count, with a long pass by Peter Horne to Jones whose inside flip rebounded back off Adam Ashe into the hands of try scorer Nick Griggs, with Russell again converting.

Glasgow’s scoring rhythm was interrupted when centre Chris Farrell intercepted a laboured pass to romp in for an unconverted try. But it was soon back to business for the Scotstoun team as the Warriors’ forwards drove a maul, and the end result another penalty goal by Russell.

The Warriors claimed their bonus point after a surging run by Sarto gave second row Scott Cummings a try under the posts leaving Russell to put over his easiest kick of the match.