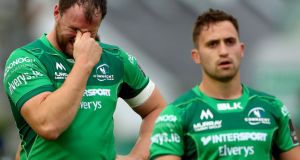 Connacht’s Eoin McKeon shows his disappointment at the final whistle after Cardiff Blues snatched a late victory at the Sportsground. Photograph: James Crombie/Inpho

A poor start to matches is reflected in a disappointing beginning to the Kieran Keane era, and the new Connacht boss is taking it to heart.

“The players are heartbroken, I’m a little bit the same. I am an emotional man, so it is tough to take,” said Keane after Connacht had let slip a five-point lead in the final two minutes against visitors Cardiff Blues, thus recording a third loss.

Their inability to produce a commanding first half has become a familiar theme, bar a 24-5 interval lead against the Southern Kings in their sole Guinness Pro 14 victory to date.

It has been a tough baptism for the New Zealander who was in charge of Super 15’s most exciting attack and some plain speaking is expected at today’s review in the Galway Sportsground.

“A little bit of deja vu from the first game against Glasgow, similar conditions similar set-up. I don’t think we had the right attitude at all, we knew we had to be pretty combative against Cardiff.

“We had planned for it, worked hard all week on various things, and we were confident we were well-prepared and ready to go, and we didn’t fire a shot. To lead by three points with that wind behind us was clearly never going to be enough, and so it proved.”

Thus, for a second successive week, Connacht handed their opponents a first win of the season. It seemed harsh for the home side who had done all the work against the wind to take a 15-10 lead, but a poor restart which handed the Blues a scrum, and woeful defence in the last play, allowed centre Willis Halaholo to saunter over for his second try to level the match, with replacement Jarrod Evans adding the conversion for the visitors’ first Pro 14 win this season.

“There is an issue around the defence, like there is around the attack.” said Keane. “I put it down to panic. When I looked from up on high, you could see everything unfolding from that scrum, everybody was too tight, nobody was looking up, everybody was trying to react with their gut and not their brain. They weren’t talking to each other, and there about five people on two players, so that creates space for other team – that is defence 101.

Having opened their account with an 11th minute penalty from centre Craig Ronaldson, Connacht spurned clear-cut chances in that opening half, and struggled to impose themselves at the breakdown where they conceded a host of penalties.

They were not helped when John Muldoon was yellow carded – after he was deemed to have tackled a player without the ball – and minutes later Ultan Dillane conceded a penalty, from which centre Willis Halaholo scored a try, with Shingler adding the extras.

The home side stepped up their intensity after the restart and were rewarded with two tries – a third effort was denied by TMO – but Connacht handed the platform to Cardiff in the final two minutes and they duly took advantage.

“Lessons are hard learned, aren’t they? We are learning the hard way, no other way to say it really,” said Keane.

The learnings may take some time. Keane is working on new structures with a different coaching team and a young group of players – only five of the team on Saturday were starters in the PRO 12 final.

“Every gig I have done over the last 37/38 years has been tough. You just have to ride them, ride the tough bits. There is some tough talk at half-time – if you don’t improve, we are going to go backwards pretty quickly.”