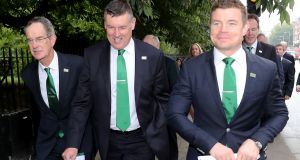 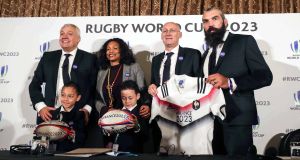 British Prime Minister Theresa May has given her backing to Ireland’s bid to host the World Cup in 2023.

Ireland’s Taoiseach Leo Varadkar revealed that May has written to the Rugby World Cup organisation, affirming the United Kingdom’s support for the 2023 bid.

Varadkar was the only state figurehead attending in person as Ireland, France and South Africa presented their bids to stage the tournament in London on Monday.

President Emmanuel Macron has distanced himself from France’s bid, declining to provide a video message as previously promised, while the French paraded support from the late All Black wing Jonah Lomu’s sons in their pitch.

“The main reason I’m speaking to Theresa May is around Brexit and also restoring the institutions in the north,” said Varadkar, who was due to meet May at Downing Street.

“However, she has written to World Rugby, supporting our bid, and assuring them that the United Kingdom government is behind it too.

“And I’m very grateful for the fact that she’s done that.

“I’m really delighted to be here in person. I wouldn’t have missed today for anything.”

France made the bold claim that their bid would generate the most revenue for organisers Rugby World Cup.

Varadkar said of those claims: “Of course they are going to say that, but we would say otherwise.

“It’s massively important and it shows the seriousness of our pitch,” said O’Driscoll of Varadkar’s appearance.

Ireland were able to allay organisers’ concerns around the impact of Brexit, with a great deal of uncertainty still surrounding the land border between Northern Ireland and the Republic, and Varadkar threw his weight behind Ireland’s cross-government pledge to underwrite the entire cost of staging the 2023 tournament.

“I pointed out while there is plenty of uncertainty, one thing that is certain is that the common travel area will remain in place,” said Varadkar.

“Our bid makes sense not just for rugby but also for the Irish taxpayer and the Irish economy.

“The French have said this would cost their taxpayer nothing, but we take the view that this is a good investment in our economy.”

“There was no video (from Macron), I’m here to represent the government,” said Flessel.

Late All Black wing Lomu’s sons Dhyreille and Brayley Lomu boosted France’s bid, with seven-year-old Dhyreille born in Marseille when his father played for the club.

“They would love to come back in 2023 to experience the World Cup in the country where their father was so happy.”