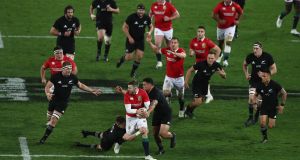 The British and Irish Lions will play less games on their tour of South Africa in 2021. Photo: Getty Images

The British & Irish Lions tour to South Africa in 2021 will be cut to eight matches in a move that will be welcomed by England’s Premiership clubs, but future trips could be restored to 10 fixtures with the four home unions keeping their options open.

Talks with New Zealand, Australia and South Africa about an agreement to cover the three tours in the next 12 years are approaching a conclusion. The Lions have come under pressure from the Premiership, which secured the backing of the Rugby Football Union, to cut the duration of tours and reduce the load on leading players.

The Lions toured New Zealand this summer and played 10 matches but the first was staged three days after their arrival with the players so jet-lagged that at least one fell asleep on the coach to the game against an invitation side in Whangarei.

The squad did not have one training session as a whole group before flying out because of the Premiership and the then Pro12 finals, but in 2021 the tourists will leave on a Tuesday and not play for at least a week. It has yet to be decided whether to play the first match in South Africa on a Wednesday and have no midweek matches after the first Test or start on a Saturday and have a game in between the first two internationals.

One of the reasons why the Lions have agreed to cut the number of fixtures is the belief that South Africa, unlike New Zealand this year, would struggle to field seven teams of sufficient strength outside the Tests. The country has suffered an exodus of players to Europe and Japan this decade and this year cut two teams, the Cheetahs and the Southern Kings, from its Super Rugby roster. They have since joined the Celtic unions and Italy to form the Pro14, but both have struggled this month.

The 2025 tour to Australia is also likely to be eight fixtures based on the current strength of the game there, but nothing is set in stone because of the fluid nature of international rugby. The thought is if New Zealand rugby remains strong, it would be worth playing 10 matches there in 2029.

“Each tour will be looked at on its merits,” one administrator said. “We will be keeping an open mind. A shorter tour means longer preparation time and clearly had the Lions been in South Africa this year, it is unlikely that there would have been the 10 meaningful fixtures that there were in New Zealand where the strength of the warm-up teams meant the Lions went into the Test series battle-hardened.”

The Rugby Football Union proposed the reduction to eight matches earlier this year, bearing the message of its leading clubs who said after this year’s tour that they were not willing to move the date of the Premiership final to accommodate the Lions in the future and that if the tourists wanted more preparation time, they had to cut the number of fixtures.

The clubs lost a battle last week when the RFU’s proposal to shorten England’s Six Nations campaign to six weeks by missing the first round and playing France on the first fallow weekend was dismissed without a debate. The matter went straight to a vote without anyone speaking up in favour of the union’s proposal and was lost 5-1.

The RFU faces having to pay the clubs compensation because the six-week Six Nations campaign was part of the elite player agreement the two sides signed last year. The governing body’s failure to secure support means the England head coach will have his squad for an extra week.