Leinster’s Lions expected to feature against Edinburgh on Friday 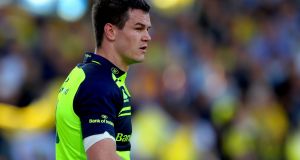 Johnny Sexton and the rest of Leinster’s Lions players are due to return against Edinburgh this weekend. Photograph: James Crombie/Inpho

Leinster’s five British and Irish Lions are expected to feature against Edinburgh this Friday at the RDS. Senior coach Stuart Lancaster returned early from South Africa, missing the defeat to the Cheetahs in Bloemfontein, to ensure Jack McGrath, Tadhg Furlong, Seán O’Brien, Robbie Henshaw and Johnny Sexton were primed for their seasonal debuts.

Devin Toner and Wallaby signing Scott Fardy, who both missed the tour as their wives were expecting, are also set to return to the secondrow but Isa Nacewa (calf) and James Ryan (foot) are aiming for Munster on October 7th or the opening Champions Cup weekend when Ruan Pienaar’s Montpellier come to Dublin.

“Jamie is going to get there,” said Lancaster. “It is the not knowing that is frustrating for him. I think we missed Jamie significantly in South Africa. But it is an injury in the back that you don’t want to take any risks with so we want to make sure he is 100 per cent right before he comes back.

“But he will be back,” Lancaster added.

The main body of Leinster’s squad only arrived home Monday morning despite playing the Cheetahs on Friday night due a complicated travel schedule caused by the short notice they received as the first Irish team to make the trek.