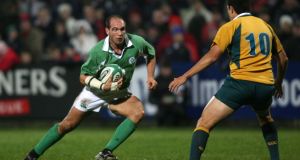 Ireland flanker Keith Gleeson in action against Australia in 2006. Gleeson believes the Wallabies are dangerous but Ireland will prevail in the final Test. Photograph: Billy Stickland/Inpho

Keith Gleeson’s allegiances are firmly with Ireland in his home city of Sydney this week. The Dublin-born, Sydney-reared former Leinster flanker played 27 times for Ireland but having returned home 10 years ago like many here he is as worried for the immediate future of Australian rugby as he is excited about Ireland’s.

He looks at European rugby, as well as rugby league and ARL in Australia, and believes Australian rugby should emulate the Leinster-Munster rivalry by having two, or even three, sides in Sydney while retaining one each in Brisbane and Canberra, and smaller stadiums to revive atmosphere at games. His own boys play under-10s and under-7s rugby, and the club game generally is quite vibrant.

“There’s great grassroots support for rugby in this country and for the Wallabies, but there is a real disconnect because Super Rugby is not ticking anyone’s boxes at the moment. Supporters aren’t really that interested.”

Gleeson knows Michael Cheika from having played under him for the last three years of his career at Leinster and met him on Wednesday. He says Cheika brought the same culture, structures and success to the Waratahs as he did to Leinster but “the tragedy was that New South Wales let him go to the Wallabies when New South Wales, if they wanted to build an institution, should have basically held on to him for five or 10 odd years.”

With the Wallabies, Gleeson says Cheika is more reliant on the provinces, but says they’re a good side under Cheika’s watch, more consistent and never give up. Gleeson has watched on since retiring in 2008 and returning to Sydney. He and his wife Fiona have two boys, Lucas, who was born in Ireland, and Dylan.

Gleeson works for the family business, AJ Gleeson’s Financial Advisors, with his father Tony and brother Marc. He and his family live in the north of Sydney, about 15-minute drive inland from Manly and other beaches.

Part of the deal with Fiona is that they holiday in Ireland every three years, and try to fit in other visits. Helpfully, he hopes, his cousins Ciaran and John are extending Gleesons Pub in Booterstown with a hotel.

Despite the time differences, Gleeson has managed to keep abreast of Irish rugby, and had his concerns that after so many high stakes games this series might be a bridge too far for them.

“But like all things success and winning become a habit. I don’t think they see this as a chance to make history. I think the players just don’t like losing. They are so used to winning that they just want to keep winning. And for them to be able to walk away from this tour having won the series in Australia on top of a Six Nations Grand Slam, what a phenomenal season. Throw in Leinster’s success as well. Jeez, you can’t ask for much more. Accolades to the IRFU, the provinces, the players and everyone who has played a part in that. It’s terrific.”

On Thursday, Gleeson was meeting Rob Kearney and Johnny Sexton (with two of his sons’ jerseys for them to sign), both of whom have gone on to achieve extraordinary success.

Gleeson puts Test players in three “baskets” – those with “bucketloads of talent, and like a moth to a flame will get there but might peter out pretty quickly. They might get a couple of years there but with no work ethic you don’t stay.”

Then there are those with “a reasonable amount of talent but have a great work ethic, which is what got me there and kept me there for a number of years.

“And then you’ll get the freaks, and Johnny and Rob fall in this basket, terrific players and have huge work ethics.”

This is why they are each having the best seasons of their careers, and are also leaving “a great legacy” to younger players.

Looking ahead to this series decider, Gleeson found it hard to call.

“Australia are always dangerous to write off and they have the ability to score tries. I think Ireland will be disappointed in terms of the second Test in that the tries they gave away were pretty weak tries,” he says, citing Kurtley Beale’s clean break and the penalty try off a maul. “So they will tighten up those aspects of the game.

“I still think Ireland are in a better mode. They’re used to winning. They know how to win. A bit like England in 2003, even when they didn’t play well, they knew how to win.

“So I think my money is on Ireland but it’s not going to be easy.”

He looks back on his own Irish career with pride, having played 120 matches for Leinster and 27 times for Ireland over a seven-year period. His biggest regret was breaking his leg at the end of preseason in 2005. Initially told he might not be able to walk properly again, never mind play rugby, he worked hard to get back. But never being the biggest or the strongest, the discomfort in his ankle dimmed his enjoyment over the next two years. He resolved that before his final season (2007-08) he would enjoy it as much as possible, and did so.

Born in Dublin and from an Irish family, the best decision he ever made was to relocate there in 2001.

“I remember at the time, I was 23 or 24, and a conversation came up and I spoke to couple of people who were mentors to me at the time. Steve Tuynman was one, the ex-number eight for Australia, and he said: ‘What’s the worst that can happen? You go, and don’t make it? You can then walk away from rugby saying at least you gave it your best shot. If you don’t go, you’ll always wonder what could have transpired.’ So no I have absolutely no regrets, and life is like that.

“Sometimes you do things and you’ll fail at what you do, but the reality is the only people who ever fail are people who don’t pick themselves back up, dust themselves off and go again, because everyone in life fails at some point in time.

“The move to Ireland gave me a second chance and a chance through rugby which led to great personal triumph and success. I also met my wife, who’s Irish. I have two beautiful boys as a result of all that. Great times.”

The highlights are easy enough to recall, namely the breakthrough Celtic League final win of 2001 and the Magners League title in his final year.

“Personally, from an Irish perspective, probably my greatest achievement was not my first Test, but actually being able to play another Test after I broke my leg. That was in New Zealand in Hamilton in 2006 and I was only on the bench. To do that again was huge testament to how hard I worked to get over that injury.

“The first Test I was probably naïve and stupid and thought I’d play 100 Tests for Ireland, so I didn’t appreciate it as much. Certainly after a bad injury you came to appreciate that when you get chances to play at that level you’ve got to take them. That was a great moment in my career.”

His continuing allegiance is a no-brainer.

“I was asked this question at lunch yesterday,” he says, sounding somewhat aghast. “I nearly knocked the guy who asked this off his chair. Look, I played 27 Tests for Ireland. Why would I ever not go for Ireland? So I always support Ireland. I support Australia other than playing Ireland and that’s always the way it’s going to be.”