Irish rugby head coach Andy Farrell has made one change ahead of the "massive game" against France. 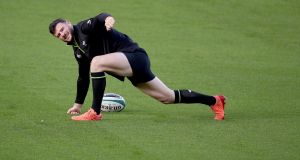 Munster centre Chris Farrell has been added to the Ireland squad to face France in Paris on Saturday night in the final round of the 2020 Six Nations.

That is the only change by head coach Andy Farrell from last week’s 50-17 victory over Italy in Dublin as Jamison Gibson Park has recovered from a leg injury to provide scrumhalf cover for Conor Murray.

However, Connacht’s Kieran Marmion will travel with the team.

Depending on England’s potential margin of victory over Italy in Rome, Ireland may know that they require a bonus point victory to clinch a second Championship in three seasons.

“High risk strategy? Probably not,” said Farrell. “A plan that we know and are comfortable with, so we can play our own game and see how it effects France. It is going to be a game of feel for 80 minutes. It certainly won’t be a high risk strategy as you have seen the team we are playing against and we could end up shooting ourselves in the foot massively.

“We could score four tries and still lose the game. There is no point scoring four tries if they score six. We will stick to the plan and see how it unfolds, hopefully we can put enough pressure on for the game to open up some way along the line but it is a tough old task, isn’t it lads?

“We know what the French are capable of, watching them last weekend [beating Wales at Stade de France] they are a formidable side with threats all over the field.”

Cian Healy is set to win his 100th cap 11 years after making his debut against Australia. Injury saw the 33-year-old dropped to the bench behind Jack McGrath in 2015, 2016 and 2017 - when he missed out on a second Lions tour - but in every other season since 2009 Healy has been Ireland’s primary loose head prop.

“We got a stalwart in our team who is getting his 100th cap so it is a pretty special week for us all,” Farrell continued. “I think the key word to describe Cian is resilience. Like any top player, I don’t think they ever quite get comfortable to think selection is just going to happen. What’s driven Cian on to get to 100 caps is his fight to want to keep on improving.

“Over time he has understood his body.

“I heard him saying to you guys during the week that he was a devilish kid who got away with murder,” said Farrell of the prop formerly known as DJ Church. “But like any top, top line professional who ends up getting to this milestone, which is an unbelievable feat, he has been unbelievably professional in how he has looked after himself.

“We honestly feel it is an absolute privilege to be involved in this occasion with Cian.”

Interestingly, Ireland travel to Paris with 31 players, due to the risk of a Covid outbreak, with 29 of them permitted to warm up pre match.

Farrell explained: “24 to 31 will be prepared to step in and any given moment.”

On the defensive structures Farrell’s former Wigan teammate, Shaun Edwards, has introduced to this French side, the Ireland coach added: “The obvious thing is the line speed but the only reason you are able to get line speed is they win the collisions first. I think the pack is mobile, different to French forward packs before, and the pressure they put on at the breakdown allows slow ball so therefore they are able to get set and get off the line. If you get those pieces right before you can put line speed and pressure onto the opposition attack. That’s been the biggest difference.”