‘I can’t sit here and tell you 100 per cent we’re going to be perfect. But our intention is to be’ 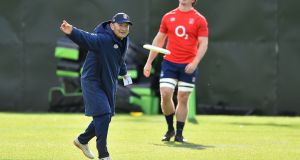 Eddie Jones has reminded his players of the need to adhere to strict Covid protocols after England’s opening match of the autumn was called off because of two separate breaches by Barbarians players last week, but he admitted he cannot guarantee they will not break the rules.

The English Rugby Football Union faces up to £1 million in lost TV revenue and sponsorship after Sunday’s match had to be cancelled when it emerged a number of Barbarians players broke protocols last week. Over the weekend video footage came to light of Chris Robshaw and a number of other players in a Mayfair pub, breaching the Barbarians’ Covid code of conduct as well as the government’s “rule of six”, raising the prospect of a police investigation. Saracens’ Sean Maitland was among the Barbarians players and on Monday he was left out of the Scotland squad.

England, meanwhile, were denied the chance to warm up for their crucial Six Nations finale against Italy on Saturday and are in danger of heading to Rome, in need of a bonus point and a sizeable winning margin, undercooked.

Compounding matters, George Ford has been ruled out, meaning a radical overhaul of England’s midfield. Elliot Daly is also on the injured list with Jones on Monday naming nine uncapped players in his 36-man squad to face Italy and for the subsequent Autumn Nations Cup, including the in-form flanker Jack Willis and Jacob Umaga, who could make his debut in Italy in Ford’s absence.

England players are not permitted to leave their Teddington hotel, except for authorised training breaks or medical reasons. Although they have a games room installed to keep boredom at bay, Jones conceded there could be breaches. England are staying in the same hotel as when Manu Tuilagi and Denny Solomona were sent home in disgrace for a late-night drinking session in 2017.

“We’ve spoken about it briefly,” Jones told Sky Sports. “One of the things I learned about being a school principal is not to talk about the rules too much because then you have to worry about enforcing all the rules.

“We’ve told the players they’ve got to be responsible and they all understand that right at this moment and then there could be a moment when they don’t understand it. I can’t sit here and tell you 100 per cent we’re going to be perfect. But our intention is to be.”

Ford’s injury absence causes a considerable headache with Tuilagi also out injured and the captain, Owen Farrell, having not played a competitive match since early September.

Farrell is expected to move back to fly-half against Italy – if Umaga makes his debut it would seem most likely to be from the bench. To demonstrate how important Ford is to Jones, the Leicester fly-half has been in 53 of Jones’s 54 matchday squads.

Henry Slade’s presence in the squad is therefore welcome but, like Umaga, he has just finished his domestic campaign with Exeter and Jones will make individual assessments on whether the seven players from the Chiefs and Wasps are ready to face Italy.

Slade is one of only three Exeter players called up, with Jones again ignoring both Sam and Joe Simmonds.

“We’ll have to juggle things around and play slightly differently but we have some very good players there,” he said. “We have got guys coming in who are literally going to have two training sessions to be part of a team. That is the challenge ahead.”

Meanwhile, England’s last group match of the Autumn Nations Cup away against Wales will take place at Parc y Scarlets after Wayne Pivac’s side confirmed their home matches will be played in Llanelli. Wales had explored the option of staging home matches at the Tottenham Hotspur Stadium but, with no fans allowed to attend, the Scarlets’ ground has been preferred. - Guardian