Captain Ciara Griffin praises French ‘sportsmanship’ ahead of next encounter 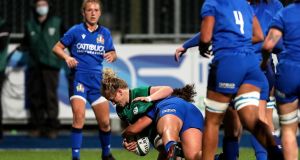 That Italy didn’t hurt Ireland when they had the chances in the opening 20 minutes, due largely to strong defensive tackling all round, helped a rusty home side grow into their third home win in this year’s Six Nations Championship.

Ireland improved as the match progressed and that will probably need to continue as they face France in their next outing. The French conceded home advantage because of the quarantine amateur Irish players faced on their return.

There were suggestions an element of brashness was stitched into that arrangement. However, Irish captain Ciara Griffin shot down any theories other than French sincerity as the only reason for the unprecedented gesture.

“I think it shows massive sportsmanship to be honest,” said Griffin. “I don’t think there is any cockiness in that whatsoever. The French are great players. I think what it showed us is the values in rugby that we have, the integrity of rugby. Fair play to France. Massive sportsmanship and we can’t wait to play them.”

Griffin also saw Ireland’s win as a glass-half-full performance. The set-pieces improved as the match advanced with the try that put the outcome beyond reach on 70 minutes coming directly from a scrum, which the Italians collapsed for a penalty try.

The five Irish lineouts missed will be part of the running repairs this week. Ireland also landed 198 tackles with zero of those resulting in turnovers.

But a fresh Claire Molloy back winning player of the match is a bonus along with the threatening Béibhinn Parsons and a rejuvenated Lindsay. One game at outhalf for Hannah Tyrrell has also doubled her experience in the position and with the conversions can feel the first outing was a positive experience. Ireland can build and become stronger.

It was Italy who scored first. Lack of accuracy with the ball kicked out on the full gave the Italians field position. Possession secured, Italy, who Ireland had kept out so well in the previous 10 minutes, found space. Again flanker Giada Franco, whose total carries were 147 metres, bumped up the yards, and with Ireland stretched, hooker Melissa Bettani made the line, Michaela Sillari converting for 7-0.

The stage seemed to be set for Ireland to push on after the break. But a scrappy second half halted any notion of a bonus point win, the pushover try finally sealing the deal 10 minutes from the end.

“After a long break you are going to get rustiness,” said Griffin. “I think definitely the glass [is] half full. It’s great to get that win.We absorbed a lot of pressure in the first 20. As the match went on we got more of a feel for it. That’s going to stand to us next week as well.”