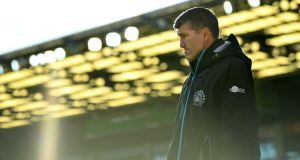 Ten years ago the Exeter Chiefs went to Bristol in the second leg of a promotion play-off in the Championship. They’d finished four points behind Bristol and had only won the first leg 9-6, but helped by two drop goals and six penalties from their Ulster outhalf Gareth Steenson, stunned Bristol in a 29-10 win.

A decade on, they are back in Bristol on Saturday to face Racing 92 in their first ever Heineken Champions Cup final.

“It is probably the biggest game in the club’s history now we have got here,” said their Director of Rugby Rob Baxter this week, “and we have had to win a lot of big games to get here - but I still harp back to promotion to the Premiership being the fundamental step.”

That they are back in Bristol a decade on is a good augury as far as Baxter is concerned.

“Maybe it’s not irony, maybe it’s just fate,” he said cheerily. “You’ve got to look at it in all the positive ways. Maybe that’s the circle of life sometimes, isn’t it?”

It’s been some journey, eclipsing any club in the professional era - anywhere.

When the game turned pro in 1995, Exeter had just been relegated to the Courage League Division Four. Successive promotions followed, and after an 11-year stint in what became the Championship, they have cemented their status as a powerhouse of English club rugby by winning the Premiership in 2016-17 and finishing top of the table for the last three seasons.

That means Exeter are the only club to have won the top four tiers of English rugby, and they now stand within two games of a double as they are due to play Wasps in the Premiership final next Saturday.

They have done all of this without losing money, never mind breaking the salary cap, and until the arrival of Stuart Hogg and Jonny Gray last year, didn’t make marquee signings. Indeed, Exeter only provided two of England’s World Cup final ‘23, and both Henry Slade and Luke Cowan-Dickie were on the bench, although Jack Nowell was injured.

Baxter still scours the Championship for unpolished gems, as well as abroad, witness signing the likes of Harry Williams, Alec Hepburn and Tomas Francis. Tom O’Flaherty was playing for Bridgend Ravens and on the fringes of the Ospreys before becoming one of Exeter’s most potent attackers.

Baxter and co also identified players deemed past their best elsewhere before rejuvenating them at Sandy Park, such as Geoff Parling, Thomas Waldrom and Julian Salvi, and latterly Ollie Devoto and Olly Woodburn.

Australians Dean Mumm, Nic White, Greg Holmes and Dave Dennis, along with Don Armand, Jacques Vermeulen and Jannes Kirsten from South Africa, were signed as much for having the right character.

No players epitomise Exeter's recruitment policy better than the Irish trio of Steenson, Ian Whitten and Tommy Hayes. Steenson is finishing up following next week’s final, the ex-Ulster academy outhalf establishing himself as a club legend since joining them from the Cornish Pirates in 2008.

In 311 games for the club he is the club’s all-time record points scorer (2,630) and also nailed both the equalising and match-winning kicks in that 2017 Premiership final against Wasps.

He played his 50th European game for Exeter when coming off the bench in the quarter-final against Northampton and Whitten emulated him in the semi-final win over Toulouse. Whitten had established himself at Ulster and won a couple of Ireland caps when accepting a new challenge at Exeter in 2012.

Hayes, brother of The Bull, played 136 games for the club over five seasons after joining from Plymouth in 2008, captaining Exeter to promotion and also in their first season in the Premiership.

Another key to Exeter’s relentless rise has been consistency of personnel off the pitch as well as on it. This begins with Baxter, who played for the club in the lower leagues for 14 years (captaining them for 10), then moved onto the coaching ticket upon retirement in 2005 and is now completing his 11th season as either head coach or Director of Rugby.

“It’s actually over 30 years,” he notes of his involvement with the club.

“I played Colts rugby for Exeter. I think the first game I played I was 16 or 17, so that’s 33/34 years ago. Does the last 20-odd years feel like it’s gone by like it’s taken half your life? Of course it doesn’t. It feels like a blink of an eye.

“It’s been a fantastic journey but the important thing is what we do every day, every week and every month and I think that’s what we’ve got right as a club.

“People talk about me and my involvement at the club, but Ali (Hepher) has been here 10 or 11 years,” says Baxter in reference to the club’s head coach.

“Ricky Pellow (skills coach) has been part of our coaching team for 15 years and maybe longer, because he was involved with the academy. Rob Hunter (forwards coach) must have been here for seven or eight years. Julian Salvi (defence coach) has been around the club four or five years. There’s players here who have played for over 10 years and Tony (Rowe) has been involved with the club 20-odd years,” Baxter adds in reference to the club’s chairman, CEO and driving force.

From a working class background in Plymouth, Rowe left school at 15 with no qualifications and served in the navy for eight years. Retrained as a marine engineer, his first business - Exe Marina Services - repaired outboard motors. He loved water skiing and became a semi-professional racing boat pilot for 10 years.

Rowe also launched the South West Communications Group (the club’s main sponsor) in the early ‘80s following the privatisation of the telecommunications market.

The bigger picture stuff is fantastic, isn’t it?

He’s a stamp collector, has his own fire engine museum and likes long-distance motorbike journeys, such as driving across Russia for three weeks, then 68-years-old, in the summer of 2017.

Invited to help with the club’s marketing and sponsorship in 1993, five years later he advised them to form a board of directors and became their chairman and CEO. He appointed Ian Bremner as head coach for eight years before replacing him with Pete Drewett, and then handing Baxter the reins in March 2008.

Rowe runs an expanding and profitable ship. The club relocated from its historic home of the County Ground, to a new, purpose-built Sandy Park, with conference and banqueting facilities, in 2006. The club has plans to further increase the capacity to a 20,000 all-seater, and has begun building an on-site hotel, while their turnover has increased from around €166,000 in 1998, to €24 million in 2018-19, with a pre-tax profit of €1.75m - the only Premiership club to do so.

Rowe is ambitious. He wants the club to become a leading force in both English and European rugby, but also says he’s patient. “There’s no rush.”

That said considering where, for example, Leinster are now compared to 2009, becoming European champions for the first time should only see Exeter grow even further.

“One hundred per cent,” says Baxter. “The bigger picture stuff is fantastic, isn’t it? Hopefully, if we can fast forward six months and we’ve got a full stadium here, and if you can walk through the lobby downstairs and there’s a Heineken Cup there in the cabinet, the whole thing of how can you talk about yourselves, how you can approach the game, how we can sell it to people, everybody knows that all of these things elevate everything else you can do moving forward.

“We’ve got a hotel being built down there; there’s cranes banging around there now. We want to have that full every week, we want it full every day if we can. We want people coming to the home of the Heineken Cup champions even if they’ve nothing to do with rugby. We want to hold an event here because they want to see what the place is like. The whole thing needs to be part of an ongoing process, we’re very aware of that.”

Perhaps realising he was in danger of getting ahead of himself, Baxter drew back and said: “Making these things happen as we go along is very important but they’re things for the future. As much as they are the bigger picture things and the future things, actually it’s time for us to be a lot more simple than that.”

“The reality is that there’s going to be 30 rugby players getting on a couple of coaches and heading up to Bristol and focussing on each other, and seeing what they can achieve in what will hopefully be an incredible 80 minutes.”

The journey isn’t finished yet.