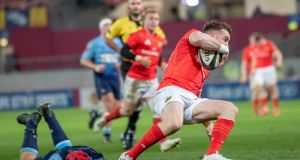 Munster claimed top spot when triumphing in the clash of the two unbeaten sides in Conference B of the Guinness Pro14 at Thomond Park, the opening Monday night fixture proving a try laden, entertaining tussle. Johann van Graan will have been pleased with the victory, if not some of the fine print associated with the defence at times as his side gave up tries a little too cheaply.

The home side’s unbeaten start to the season was maintained on foot of a hard-nosed performance by the pack in which number eight Gavin Coombes (two tries), man of the match Jack O’Donoghue (try) and James Cronin were outstanding. All bar one of their five tries came through the pack, replacement outhalf JJ Hanrahan the only back to cross the Cardiff line.

The Cardiff Blues took the lead with a try that didn’t require much invention. Outhalf Jarrod Evans rode Rory Scannell’s tackle for about four or five metres enough for a breach of the initial defensive line before offloading to the supporting Ray Lee-Lo who crossed unopposed. Evans tagged on the conversion.

It was the ideal start for the visitors but soon after a moment of madness from Willis Halaholo, guilty of a not very subtle foot trip on Dan Goggin, cost Cardiff a player as the centre was dispatched to the sin bin. Munster maximised the numerical advantage when their excellent Coombes powered over from close range following several rumbles around the fringes close to the Cardiff line.

Ben Healy added the conversion but on 16 minutes James Botham caught the Munster defence flat footed, made 30 metres and when John Hodnett was penalised at the ensuing ruck, Evans struck the ball between the posts.

The home side got some rhythm and continuity to their patterns with Healy, Coombes and Hodnett all making line breaks to take play into the Cardiff 22. The visitors conceded penalties as they tried to defend their line and Coombes grabbed a second try when he touched down under a pile of bodies to the satisfaction of referee Andrea Piardi.

Healy kicked the conversion to move the home side into a 14-10 lead but Dan Goggin, playing his first game since February, took a bang in the build-up to the try and was replaced by Damian de Allende. Evans kicked a penalty but Healy responded in kind just before the interval to leave Munster 17-13 ahead at the interval.

Munster started brightly on the resumption, quickly forcing their way into the Cardiff 22, but the visitors managed a couple of important breakdown penalty turnovers, the home side also guilty of a little shovelling on in their passing that put the recipient under unnecessary pressure.

Healy struck a post with a penalty but the home side extended their lead when hooker Kevin O’Byrne profited from a well constructed lineout maul that careered over the line to dot down, Healy adding the conversion.

Cardiff responded immediately, Evans’s brilliant break finished nicely for a try by right wing Aled Summerhill which the outhalf converted. A handling error from the restart gave Munster field position and the pack bullied their way over, Coombes tip on pass allowing O’Donoghue to cross for the bonus-point try as the home side took a 31-20 lead.

The Welsh side’s riposte was a try for Halaholo but Hanrahan, on for the injured Healy, finished off a sweeping move replete with some nifty passing to push the home side out to a 38-27 lead, which they maintained to the finish.

Gerry Thornley: Maybe the new Ireland could do with a little of the old detail 06:00
Kevin McStay: Beautiful chaos of this year’s All-Ireland to end in a Dublin-Mayo final 06:00
David Nucifora confident IRFU will keep majority of players they want 05:30
Owen Doyle: Scrum a major issue World Rugby must address 01:01
Brian Kerr: ‘The uncertainty, lack of support from the FAI, it was a dark time’ 01:00
Here is your handy guide to sport on television this week