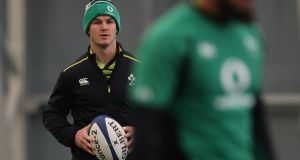 Johnny Sexton will look to orchestrate a famous Irish win in the Stade de France on Saturday. Photograph: Billy Stickland/Inpho

From Paris in the spring to Paris in the winter. Ireland head to the French capital this weekend with the Six Nations title on the line, 33 weeks after the original fixture was postponed.

Andy Farrell’s side made their long-awaited return to action last weekend, as they dusted off the cobwebs with a 50-17 win over Italy at an empty Aviva Stadium.

That victory has moved Ireland to the top of the Six Nations table, and they are now one bonus point win away from being crowned winners of perhaps the strangest Championship ever.

But doing so won’t be easy. Winning in Paris is a big ask in itself - for Ireland, scoring four tries in the process would be unprecedented.

Les Bleus are a side reborn under Fabien Galthié - they play with vim and verve and are the northern hemisphere’s coming force as they prepare for a World Cup on home soil in 2023.

With England due to play Italy on Saturday afternoon both Ireland and France will know exactly what they need to do in order to be crowned champions on Saturday night. A Halloween thriller could be on the cards.

Here is everything you need to know as the 2020 Six Nations finally reaches a conclusion.

The final round of fixtures in the 2020 Six Nations Championship, including Ireland’s trip to play France in Paris.

All three remaining games are being played back-to-back on Saturday October 31st. Wales take on Scotland at 2.15pm, Italy meet England in Rome at 4.45pm before Ireland and France kick-off at 8.05pm (Irish time).

Due to Level 5 Covid-19 restrictions people across the country will be resorted to cheering on Ireland in their own home. All three games are on terrestrial television, with Virgin Media One showing them consecutively. Ireland’s clash with France is also being shown by the BBC, with the first half on BBC 2 and the second on BBC 1. And you can also keep up to date with all the action in Rome and Paris via the Irish Times liveblog, starting at around 4.15pm.

What are the remaining fixtures?

What are the results so far?

So, what are the permutations?

Three teams can still win the Championship - Ireland, England and France. Here is a look at what each side needs to be crowned champions.

Ireland currently top the table on 14 points. They are the only side whose fate rests entirely in their own hands, and a bonus point win in Paris would give move them to 19 points and see them win the title.

If Ireland are beaten by France on Saturday, they can’t win the title. A draw could be enough for Ireland to finish top of the table providing England don’t win in Rome.

England are currently second in the table on 13 points and their job on Saturday is fairly straightforward - beat Italy with a bonus point, while racking up as many points as possible.

Eddie Jones’s side currently have a points difference of +15, inferior to Ireland’s (+38) but superior to France’s (+13). This means if England beat Italy with a bonus point they will be crowned champions if France beat Ireland - unless France secure a bonus point, while also beating Ireland by at least two points more than England beat Italy. That seems unlikely.

If England beat Italy without a bonus point then a regulation win in Paris would see Ireland crowned champions. If England and France match each other’s points haul then it will come down to points difference.

In the unlikely event England draw or are beaten in Rome, then Ireland and France would be in a straight shootout for the title.

Les Bleus perhaps need the most fortune in order to be crowned champions, and end their decade-long wait for a Six Nations title.

France are currently on 13 points in third place and need to match England’s result on Saturday, while also overturning a current points deficit of two. For example, if England were to beat Italy 40-0, France would need to beat Ireland by 42 points or more.

So, on the whole, England look the most likely champions.

Andy Farrell has made one expected change for Saturday's match, with Robbie Henshaw coming into the side to replace the injured Garry Ringrose. Chris Farrell has been named among the replacements with the rest of the matchday 23 identical to the one which was named against Italy last weekend. Hugo Keenan and Will Connors - impressive debutants against the Azzurri - retain their places.

Meanwhile for France, winger Teddy Thomas has been ruled out due to a hamstring injury picked up in last weekend’s impressive 38-21 win over Wales. As Gerry Thornley wrote on Tuesday, a row between the FFR and French clubs has meant no player can feature in more than three of France’s autumn Test matches. That Galthie is likely to pick the strongest side available for him at the weekend shows how seriously he is taking this fixture.

Worried and excited at the same time

In this week’s column Gordon D’Arcy has said Ireland must play without fear in Paris if they are to achieve the improbable, and with both sides on the hunt for points he believes a Halloween thriller is on the cards . . .

“Ireland need to make themselves heard in the concrete jungle of Saint-Denis or face a torturous 80 minutes.

“All three title contenders are seeking a truckload of tries, so “jouez, jouez” will be the order of the day. Unfortunately, the sensible approach of dragging France into a territorial arm-wrestle is to hand England another championship. And nobody wants that.

“It’s set up to be an offloading spectacular. This is how rugby should be played and thankfully circumstances are forcing it to happen.”

History is against Ireland

The numbers don’t bode well for Ireland’s hopes of emerging from Paris with a bonus points victory - they’ve never scored four tries in the French capital before. From their last 24 visits, dating back to 1972, they have won just three times and drawn once.

And while this fixture used to be dominated by the French, Ireland have had the better of things during the last decade. In nine games home and away since March 2012 Ireland have won six and lost one, with two draws.

To win the Championship

It looks like a nice day in Paris on Saturday - 19 degrees and no rain.