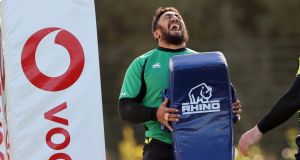 The latest misfortune to befall Garry Ringrose will necessitate at least one change to the starting team that kicked off last Saturday’s 50-17 win over Italy, but it will be a surprise if there are any further alterations to the XV when Andy Farrell unveils his hand at 1pm today for Saturday night’s 2020 Six Nations finale at the Stade de France.

Robbie Henshaw, having replaced Ringrose in the 27th minute last Saturday, looks the favourite to renew his partnership with Bundee Aki.

Henshaw also replaced Ringrose half-way through the opening win over Scotland when the latter suffered a broken thumb before then starting alongside Aki against Wales and England. The only other apparent option would be to promote Chris Farrell who has, by all accounts, been training very well at Ireland’s HPC in Abbotstown.

If Henshaw starts that leaves a vacancy on the bench which Keith Earls would seem best equipped to fill, as he did against Wales and England. But although Earls took part in last Wednesday’s 15-a-side game, the latest bulletin concerning his back issue on Monday said that he was “finishing his rehabilitation programme at the IRFU’s HPC and a decision on his availability will be made over the coming days”.

If Earls is not deemed fit enough to play on Saturday then Farrell looks the likeliest to be named out of the only other midfielders or outside backs in the squad.

While Stuart McCloskey is a specialist inside centre, the 23-year-old Shane Daly would be the more natural fit for the 23 jersey given he can play fullback, wing and centre, but he has played just 20 games for Munster and none in the last eight weeks.

The 27-year-old Farrell has played nine times for Ireland over the last three years since relocating to Munster from Grenoble, where he played for three seasons. Admittedly, this still leaves no specialist cover for the back three but with Ringrose joining Jordan Larmour, Will Addison, Dave Kearney and, potentially, Earls on the sidelines, the cupboard isn’t overflowing.

Elsewhere it’s hard to envisage any other changes based on the form shown by those who played last Saturday. Indeed, Will Connors’s form having earned him a first cap, his man-of-the-match performance only strengthened his case. Aside from his line speed and tackle execution those chop tackles bring the breakdown poachers, CJ Stander, Caelan Doris and Tadhg Beirne more into the game. Beirne also impressed with his huge work-rate at the breakdown and tackle count.

It’s a similar story on the bench, given all the replacements last Saturday brought genuine value and played their part in regaining the initiative after Italy had trimmed Ireland’s lead to 24-10 nearing the final quarter.

Rónan Kelleher (quad) is said to be fully fit again and has resumed training this week, but Dave Heffernan, mobile and strong, had a solid contribution in the tight and the loose. Another possible indicator is that the Mayo man was also put up in front of the media on Tuesday.

Akin to Kelleher, Quinn Roux is back in the frame as well and Farrell and co may opt to re-insert his physical presence on the bench, although Ultan Dillane augmented his energetic effort by stealing an Italian throw, so it would be tough on him too.

Jamison Gibson-Park, another on top of his game, also caught the eye on his debut off the bench with his speed to the breakdown and the swiftness of his service, as well as that deft grubber from inside the Irish 22 for Johnny Sexton to chase and gather.

If fit therefore, Gibson-Park will assuredly keep his place. But hamstring strains are dodgy healers, and considering the Irish management were quick to recall John Cooney as a fourth scrumhalf on Monday, this hints at obvious concern.

If Gibson-Park were ruled out, presumably Kieran Marmion, having been named in the 35-man squad ahead of Cooney, would be next in line.

The French think tank of Fabien Galthié and Raphael Ibanez will name their strongest possible matchday 23 at 10am Irish time on Thursday, but face a couple of options in potentially re-jigging their back three.

The hamstrung winger Teddy Thomas has been ruled out, while fullback Anthony Bouthier is a concern after suffering concussion at the end of the first half in France’s 38-21 win over Wales last Saturday.

The Toulouse fullback Thomas Ramos, who replaced Bouthier for the second half, would be a straight swap for him again although word from Paris is that Bouthier is on course to complete his return to play protocols.

“I know him from Racing,” said Johnny Sexton on Tuesday. “He can play ‘9’ or on the wing. He’s an outstanding athlete – fast and elusive.”

Alternatively, Galthié and co could promote the Montpellier centre Arthur Vincent and move Gaël Fickou to the left wing, as they did for the win away to Wales in the absence of Vincent Rattez, although that selection proved less effective in the ensuing defeat by Scotland in Murrayfield.

If Vincent or Ramos are promoted to the starting XV, the brilliant young Bordeaux-Begles outhalf Matthieu Jalibert, recalled to the squad on Tuesday, could be named on the bench.

With Bernard Le Roux having been cleared of foul play against Alun Wyn Jones at a disciplinary hearing on Tuesday, the pack may well remain unchanged. The disciplinary committee found that Le Roux “had committed an act of foul play (an infringement of Law 9.12) but that it had not warranted a red card”.

The only change being speculated in the French media is that starting tighthead Mohamed Haouas and replacement Demba Bamba might swap roles.

There’s also a possibility that the uncapped 21-year-old Lyon lock Killian Géraci could be named on the bench in place of Romain Taofifenua.