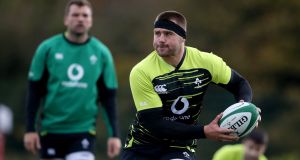 Ireland’s CJ Stander during training ahead of the Six Nations meeting with Italy. Photo: Dan Sheridan/Inpho

The sheep on the Stander farm in South Africa are a hardy breed and one in particular enjoyed more success than most opposing players in bringing CJ Stander to ground.

The Munster and Ireland number eight recalled an incident earlier in the year as he indulged in some improvised training. He had returned to the family home in George during the previous ‘lockdown’ and was out running with a rugby ball when he sensed he was being chased. He stopped to identify his pursuer, thinking it initially to be his younger brother, Janneman.

He explained: “I was doing runs and my brother is a bit of a lunatic so I just turned back after 50 metres and someone just smacked me from behind and I thought it was him. I got up and was ready for a proper old school fight, bare knuckle. It was this sheep standing there. I was a bit surprised.

“I picked myself up and my (rugby) balls to run away and saw that he kept on coming. I actually enjoyed it. A lot of people say that I don’t have footwork so it was an opportunity to show myself that I can get out of the way of danger.”

The interpretation of new laws with regard to the breakdown is an area in which Stander has excelled both for Munster and Ireland, managing seven turnovers in the green jersey dating back to the World Cup warm-up match against England last year.

He explained: “I’ll tell you one thing; it’s easier on the body, just get in (at) the breakdown and try to get on the ball. I wish they brought it in earlier. I’m enjoying it, it’s a thing where you can get some foothold in the game if it’s right. But you need to see who your referee is and opposition as well as teams are playing around that and making it difficult.”

So what’s different from a player’s perspective? “It’s the contest of just wrestling for the ball, for however long the official deems is the correct time. The 10 second wrestle is out; it’s safer for the ball carrier as well. You’re in and you need to get the ball back. It is not a big tussle.

“As soon as you lift the ball, that’s it, you’ve won the competition but the other thing is you need to be on your feet as well so, it’s just a quick contest. Clean turnovers are something that disappeared a lot over the last few years. Just looking back at guys that I grew up with, there’s Heinrich Brussow who came in, took the ball and was gone. I think if we can get to the stage then the game is going to flow.

“From my point of view, I think that’s what they (the referees) want, so getting a clean turnover is the main goal. Sometimes you get caught in there but to get a flow into the game is going to be great for the spectators and for us as well to play because you want the ball and you want some space.”

Speaking to the players during the week, there is a familiar refrain, about taking ownership of the game on the pitch. The parameters of play have been agreed and tuned in training but it is reacting in a game environment where conditions aren’t sterile that is important to the evolution of a playing style under head coach Andy Farell.

Stander said: “Yeah, when we got together in February as a group, that was the main thing the coaches wanted to give us; this is our game and our team, we need to take charge as players, we know we need ten points (from the final two games in the Six Nations).

“You’re not going to go out there and get them easy, this is international rugby but we know what we have to do in the next two weeks and that’s actually a good thing. There is no uncertainty. That’s a good way to kick off and start off.”