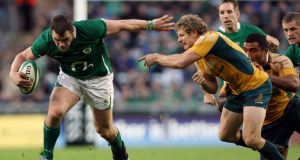 Cian Healy makes a break against Australia on his debut at Croke Park in 2009. Photograph: James Crombie/Inpho

Cian Healy will become the sixth Irish centurion when he takes the field at the Stade de France on Saturday night, thereby following in the boot prints of an august body with John Hayes, Brian O’Driscoll, Ronan O’Gara, Paul O’Connell and Rory Best having reached the milestone in that order; Irish rugby’s Praetorian Guard in appearance terms.

It is 11 years since the 33-year-old made his debut against Australia at Croke Park and quite apart from his prodigious talent he’s shown mental and physical resilience to overcome a number of serious injuries. The good news is that he “feels great”.

He’s never been one to dwell on personal landmarks, preferring to shelter under the umbrella of team achievements and isn’t about to change tack now. In speaking to many players this week about Healy, there is warmth to the stories in recognising an outstanding player and contributor to Irish rugby but also highlighting a generous and thoughtful soul; a man for others.

Put in the crosshairs of the media on Tuesday, he gently downplayed his achievement in favour of what’s at stake for Ireland if they can beat France in Paris.

“It will obviously be something quite special for me, my family and people around me. Hopefully I’ll get selected because there is something bigger to play for than individual merit. I’m trying to brush it away and go for that bigger thing.”

He recalled the excitement of his debut, playing in Croke Park, and being a little star struck by some of his team-mates, although that didn’t knock his youthful swagger for long. “I was young, cocky and confident in myself. I got a bit of slagging for it but some of that confidence goes a long way.

“I remember Paulie [O’Connell] tapped me down a ball from a kick-off and that was my one outstanding memory of that game [as] I got a bit of a run off it.”

His role since then has changed appreciably. “Realistically I got away with murder when I was younger. I wouldn’t do a lot of the dog work. I’d hang off a nine or 10 to carry a ball and only hit six or seven rucks a game.

“Now you’re required to do an awful lot more work and getting on the end of the ball is part of a plan, it doesn’t happen by accident any more. I still love getting a chance to carry the ball, running through holes and fending off lads; it’s the most enjoyable part of the game for me.”

He’s been periodically unfortunate with injury but his neck surgery in 2015 posed arguably the biggest challenge to his rugby career. He explained: “It [the rehabilitation] was broken down into so many stages. The first was to be a functional human again and open the door with the keys and stuff like that.

“Then it was a constant drive for fitness and getting my standards up because rugby keeps moving on. So you look at lifestyle changes and all of that.”

Speaking of which he stripped the positives from the recent ‘lockdown period’ and used them to his advantage. “[It] gave me an opportunity to put a lot of time into things I had pushed off and not focused on as much. I nearly treated it like a sabbatical. It’s an extender and everyone should have treated it like that, to work on things that you might not have the time to when you’re game on game.

“I put a bit of a recovery system in at home and everything now is focused towards having my body in the best shape. Even outside of that, I want to be a healthy person and live a long life so that is stuff I want to do not only for rugby but for the enjoyment of my time outside that field; not walking around like a broke auld fella. You want to be as fit and healthy day-to-day and when that transfers into rugby, it’s pretty helpful.”

He underlined his gratitude to the medical teams at Leinster and Ireland who have helped him through the tough times with injury and the fact that he is a cussed character when it comes to setbacks. “A bit of a drive personally, I’m not that type of person to settle down too easily and roll over, so a bit of that as well.

Ireland head coach Andy Farrell’s decision not to tell the players the team for the weekend until Wednesday of match week has kept an edge to training. Healy confirmed that Tuesday it had been at ‘level two’ but tomorrow it’ll be full bore.

Not one to dabble in facts and figures surrounding rugby matches he may not be aware that in the last seven matches he’s played against France, Healy’s Ireland team have won five and drawn two. There’s one last half-hearted attempt to get him to offer some context as to what the weekend means but a player who learned his rugby in Castle Avenue understands the meaning of a flat bat to use a cricketing analogy.

“I don’t tend to do rankings and things like that of achievements. The [Grand] Slam was a big one, there are Heineken Cups, lots of big ones. I have loads of number one achievements that were all huge amounts of success with different groups of players. This time, it’s our opportunity to have this success with this group.”