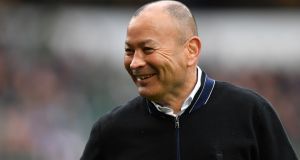 Eddie Jones reckons his England team were just much fitter than Ireland in their Six Nations win at Twickenham. Photo: Dan Mullan/Getty Images

A fully justified Eddie Jones is either a joy to behold or something to be avoided at all costs, depending on your colours. He cannot help rubbing salt in the wound. Just the nature of the man.

“We played with a lot of control,” Jones started, and he’s not wrong there. “We read conditions well, read the referee well and at half-time if it was a cricket game we could have declared.

“We were just fitter,” he added, completing the Irish team talk for England’s visit to Dublin in 2021.

The Australian loves his cricket analogies, and it sounds like he prefers the gritty nature and sledging of that sport over his beloved rugby.

“Probably a throwaway line, mate,” smiled Jones when the quote is revisited and, as usual, he could not let matters lie. “I probably need to apologise for it again. Sorry, sorry, sorry. I know you are not allowed say anything that is a little bit different here. So I apologise. I apologise for making a comment that is not in the rugby sense. Apologies.”

Cock-a-hoop, after a 24-12 victory spoiled Ireland’s bid for only a 12th Triple Crown since 1894, this was a thinly veiled reference to the ill-judged “half Asian” comment he did apologise for last week.

“We are going to go for six locks next week, to give you something to write about,” Jones said in reference to the criticism that spilled out of defeat in Paris. “Look, I don’t need vindication. I pick the team that I think is right for the week. You guys are so clever. You are so clever. Suck it all up, enjoy what you say and try to learn from you and maybe I can pick a team that is better next week.”

When the press conference stopped being about the confrontational 60-year-old, Jones paid tribute to the Maro Itoje’s stunning performance.

“He wants to take a step up as a leader within the team. You do that by influencing other players in the team. Players can go at him but the more they do the more it distracts them from their game.

“I thought him and Courtney Lawes, particularly, were outstanding. Our finishers were absolutely outstanding. When Joe Launchbury came on it is like NFL. He is a maul specialist. He comes on and we score a try off the maul. That’s Joe’s influence . . . [special teams off the bench] is the way the game is going.”

The platitudes were spread around. On just how much Manu Tuilagi brings a penetrative dimension to England’s attack, Jones said: “He’s powerful, mate. We don’t have a powerful backline, we got good movers but power is an important part of the game. When we don’t have him it is difficult.”

Tuilagi more than covered for the loss of the Vunipola brothers – neither is expected back during this Six Nations – by thundering down Johnny Sexton’s channel all afternoon and pounding CJ Stander in a wincing collison.

“Players get a lot of confidence playing with Manu. He is a very popular guy within the team. He looks after young players.”

Owen Farrell, sitting steely eyed beside his coach after a tricky but ultimately successful 80 minutes communicating with referee Jaco Pepyer, was far less forthcoming when the ruining of his father’s first visit to Twickenham as the Ireland head coach was brought up, yet again.

“Not any different from any other game I have ever played in,” Farrell stated slowly and clearly. “It is obviously something for other people to talk about. It is actually no different for us whatsoever.”

The Farrell’s are not going to bend on this line of questioning. Neither will ever feed the father and son narrative. Simply not in their nature.