Defending champions on course to retain title after 27-0 win 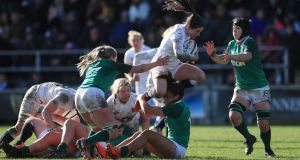 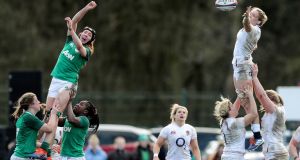 Ireland’s unbeaten start to the women’s Six Nations campaign came to a shuddering half on Sunday as they fell to a comprehensive defeat at the hands of England in Doncaster.

Sarah Hunter, Abby Dow, Jess Breach and Vicky Fleetwood grabbed tries to elevate the hosts towards an insurmountable 22-0 interval buffer. Though Adam Griggs’ outfit produced a huge defensive effort in the second period, Sarah McKenna rounded off a deserved English victory with an additional score on the third-quarter mark.

The most recent meeting between these sides took place in Donnybrook at the beginning of last year’s competition when Ireland succumbed to an emphatic 51-7 reversal and finished the championship with just one win to their name.

The Ciara Griffin-led outfit had already eclipsed their 2019 success rate in advance of this contest - back-to-back triumphs over Scotland and Wales giving them a free shot at claiming a Triple Crown in the South Yorkshire venue. Nevertheless, the Red Roses impressively dispatched the challenges of France and the Scots in the opening two rounds to maintain their quest for a 16th Six Nations title.

They hit the ground running in this latest clash with their cross-channel rivals - veteran skipper Hunter touching down at the back of a rolling maul for a third-minute try. Her Loughborough Lightning club-mate Emily Scarratt was on hand to supply the extras to give Simon Middelton’s charges a powerful early platform.

Despite this early blow, a determined Ireland went on to enjoy a sustained period of possession. Building on her impressive recent form, scrumhalf Kathryn Dane unleashed some incisive passes to force the visitors onto the front-foot.

Yet having held firm under pressure, England pounced for their second try on 14 minutes. Following an initial break from the increasingly-influential Scarratt, winger Dow crossed over for an unconverted try.

While Ireland continued to threaten with ball in hand, they were lacking the clinical edge in attack that was serving their opponents so well. This was further exemplified just shy of the half-hour when Scarratt released Breach for an excellent finish in the left corner.

This placed England within sight of a bonus point try and it duly arrived through flanker Fleetwood on the stroke of the break. To their credit, Ireland dug deep on the resumption with Ciara Cooney providing fresh impetus to the pack off the bench.

Yet England remained the dominant force and they increased gap between the teams on the hour mark. Fullback Sarah McKenna applied the finishing touches off a quick lineout move for England’s fifth try.

There was a lengthy stoppage in the closing moments as Ireland’s Sene Naoupu was stretchered off following an awkward collision. The dynamic outside centre left the field of play in a neck brace with Aoife Doyle returning to take her place.

Griggs will be hoping that Naoupu make a full recovery in time for their home encounter against Italy on March 8th.